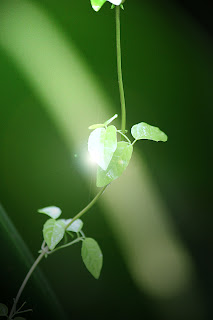 Life is full of little gems.


About eleven years ago, I came home from a neighbor island trip for work and arrived back on O'ahu. I was exhausted as usual. I got into my car and drove out of the airport parking lot and headed past the Airport Post Office towards Nimitz Highway. I peripherally noticed someone walking on the sidewalk as I passed and gazed over. I saw an elderly Polynesian man taking slow labored steps, while holding onto an adjacent fence which ran along side of the sidewalk. With him, holding his hand, was a little girl, about four or five years old, and she was carrying some kind of big briefcase looking bag.

I turned my attention back to the roadway and made it up to the stoplight. I looked back in my rearview mirror once more and could still see them, now far away from me, still making slow progress. The light turned green and I had to make an instantaneous choice. I did. And I chuckled to myself for having such a weak compassionate heart which seems to tie up a lot of my scarce free time. I turned left, instead of right, and went to the next light to make a U-Turn. I headed back and turned back down the road and drove up to them. They weren't very far from where I last saw them.

I rolled down my window and asked them where they were headed. The man, an elderly Samoan in a mix of Western and traditional clothing, smiled and said that they were headed to the bustop up the street on Nimitz Highway. I invited them in and opened up the passenger door. I pushed the passenger seat forward in my 1993 Camaro and the little girl climbed into the baby car seat I had for Elliott. Then the man laboriously and painfully got in. I asked him if he was okay and he said yes, but he had just had surgery on his legs and didn't realize how hard it was for him to walk. He said that he caught the bus to the Honolulu Airport Post Office to mail a very important letter with his grand-daughter.

It wasn't long before we passed the stoplight and turned onto Nimitz Highway. He pointed to the approaching bus stop and said "Over there is fine." I asked him where he had to go and he said Kunia. That was pretty far in afternoon traffic. I glanced back at his granddaughter and she was sound asleep in Elliott's car seat. I chuckled to myself again. I was so tired, I wanted to go home, shower, eat and sleep. But I knew there was only one right thing to do. So I told the man that I would drive him home as we whizzed past the bustop. He looked at me incredulously and protested. I told him it was okay. He asked me where I was going. I told him home. He asked where was home. I told him Pawa'a. Again he protested saying that was far in the opposite direction. I laughed, patted him on his leg, and reminded him that his granddaughter was sound asleep. He chuckled and thanked me. He told me he was so proud of her for carrying his big briefcase bag when he found himself in too much pain to walk.

We introduced ourselves. He was a Christian minister in a Samoan church. We had a delightful conversation as we slowly crawled through the afternoon traffic. About my work with my dead ancestors. About spiritual beliefs. About Samoan views of the bones of their kupuna. So many things. Finally we arrived in Kunia where he had parked his truck in a lot near the Walmart. It was a park and ride lot.

When we arrived, we had to gently shake his granddaughter from her deep sleep. She was sweaty from sleeping so hard from exhaustion. We all got out of the car and he pulled some money from his wallet and tried to give it to me for gas. I politely refused. He insisted again. I politely declined again. His granddaughter came up to me and gave me a big hug. I squeezed her hard, kissed her head, and blanketed her heart in all the love I could muster at the time.

Then the Minister approached me and we embraced exchanging words of Aloha. Then he asked me if he could pray for me. I said certainly. And as his granddaughter stood and watched, he put his hand on my bowed head, and prayed a long prayer for my well-being, safety, health, and life. I was truly humbled. I know the power of prayer. I never expected it. But my life has benefited immensely from his simple but powerful and genuine words. I made two friends on our collective spiritual journey, shared their love, and my life has been amazingly awesome ever since. Mahalo no e Ke Akua. Mahalo no my two sweet friends. I hope your dreams continue to come true. Mine most certainly have. Much love to you...