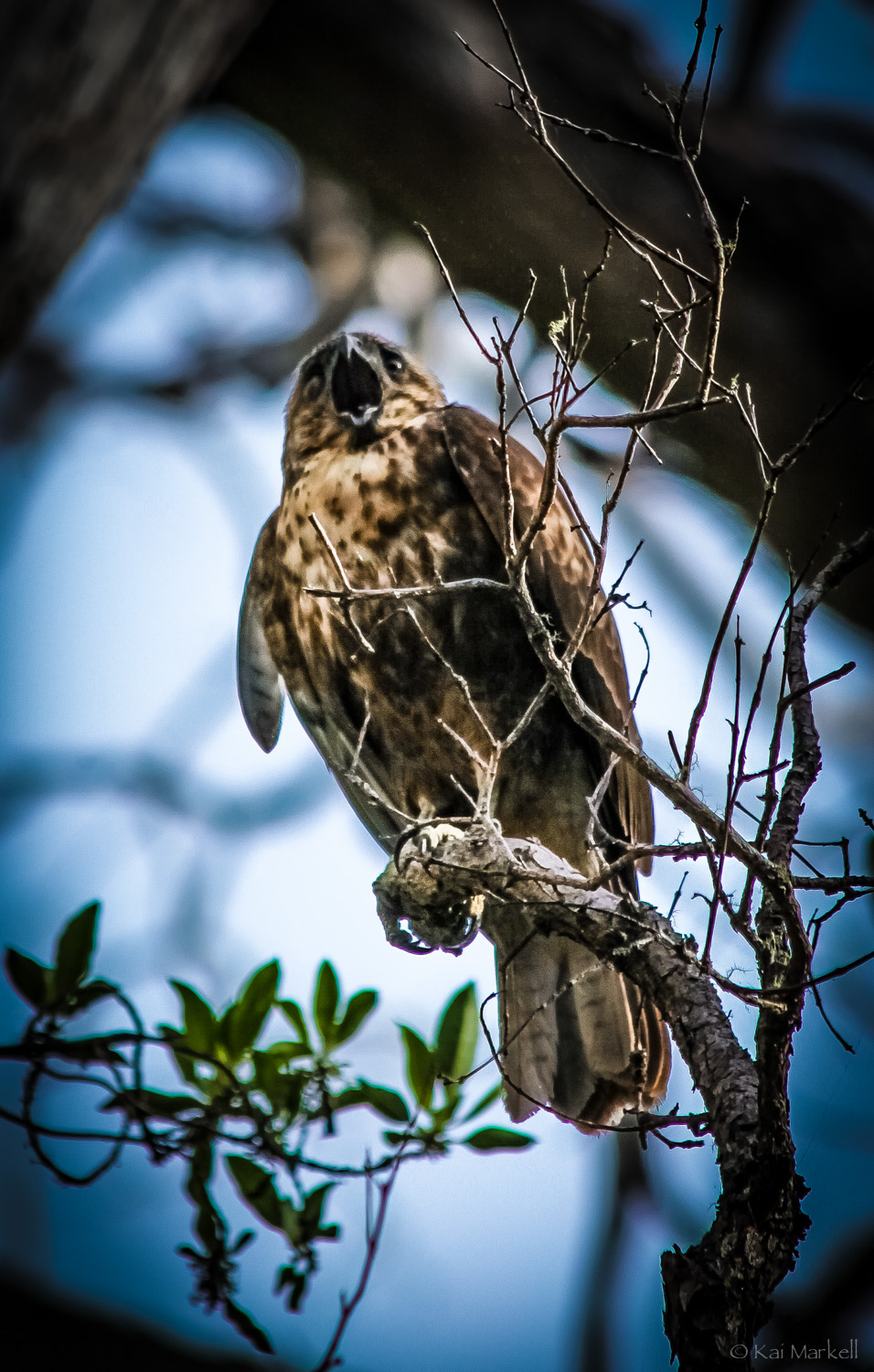 I went to Hawai'i Island for an overnight trip to take care of some family business. I was set to leave Monday night and after conducting business in Hilo, I drove back up to Volcano. As I was driving up the highway, something light colored laying in the grass alongside the highway caught my eye as I sped by. All I saw were feathers in the deep grass. I immediately felt like I should stop the car and investigate but traffic was moving too quickly and there was no safe place to pull over since the grass and mud would have enveloped my rental car. I drove further away, still thinking if I should go back and check. After a half-mile, I saw a blue plastic potato chip bag on the side of the road roughly where the feathered mass would have been, and it immediately was caught by the wind and took off into the sky. I took that as a sign. As I still drove further and further away, now about a mile and a half away...I saw a small brown bird emerge from a tall tree in front of me and he zoomed straight towards my windshield and up and over the roof of my car at the last minute. That was it. I immediately turned the car around at the next opportunity and headed back down to Hilo.


After a few miles, I made a u-turn again and watched the side of the road intently. Then I came upon the feathered mass. I stopped the car dangerously close to the lane as cars and trucks zipped past me rocking me in their draft. I recognized a Pueo. An owl. Lifeless and smashed on the side of the road in the tall grass. I grabbed its body by the talon and put him in my trunk. I got back in the car, glad that I hadn't been hit by the cars and trucks whipping by, and merged back into traffic.

As I drove up the hill, the smell of death filled the compartment of the car. I debated pulling over many times, but continued on with the windows open. I could only imagine the smell blanketing the kihei I just purchased in Hilo and the other things I had in the trunk with the Pueo. After arriving home, I took the bird out and promptly, quietly and ceremonially buried him in the backyard. To my surprise, there was no smell of death in the trunk anymore.

Realizing I had some time to spend before my flight that evening out of Hilo, I grabbed my camera and headed over to Hawai'i Volcanoes National Park, near Mauna Loa Road and the Bird Park. I roamed into the trails and bushes, enjoying the solitude and capturing forest images as I reflected upon the big changes coming to the Native Hawaiian community.

After watching some pheasants cross my path and traverse the forest trails, the rain began to lightly fall. As I enjoyed the Spiritual cleansing, I suddenly heard the unmistakable loud screeching of an 'Io, or Hawaiian Hawk. Excitedly, I peered upwards into the thick canopy of trees, looking for any sign of the 'Io as my heart pounded away. I then saw a large dark figure swoop across the canopy and followed the flight path until I emerged into an opening and saw a majestic 'Io perched on a a tree. As I shot photos, another 'Io swooped down, almost onto the first 'Io and then perched on the same tree. I couldn't believe my eyes. Just as I was pulling my telephoto back to capture both birds, after shooting a little video of the screeching, the second bird took off and flew into the forest before I could capture the two together. The first 'Io then flew down past me and descended into the thick forest somewhere behind me.

I immediately followed, walking through the thick brush and trees, following the intermittent sound of the screeching, carefully and quietly deliberately stepping one foot in front of the other so as not to make too much noise. As I got close, I stopped in my tracks and listened intently, heart still pounding. Nothing. Not a movement nor sound. I waited quietly, and still, for about two minutes, then as I took a step forward, about five feet to my right, this magnificent bird takes off from the ground, a few feet in front of me and up into a nearby tree on a low branch. I was so startled at the size of this bird with wings outstretched, I jumped and my heart pounded even more to have felt her wing draft.

As she perched right above me, I took more pictures, and she would look around, screech, look at me, then just look around again. She eventually moved over to another branch about 12 feet above me and repeated this same behavior.

I put my camera down and chanted to the 'Io permission to be in its sacred space as tears fell down my eyes. When I finished, the bird took off up into the high canopy. Again in tears and in humble gratitude, I thanked Ke Akua, my 'aumakua, my ancestors, kupuna, 'uhane kako'o, 'uhane alaka'i, and ʻĀnela kia'i, over and over as I hiked out of the forest. I was kind of numb at what had just happened and kept scrolling through my camera LCD screen to make sure I really captured this bird. It still moves me to tears when I recall the experience.

Later, I recognized that this magnificent bird, had a swollen and injured right eye. I knew that whenever I conduct ceremonies at 'Iolani Palace, my right eye often becomes irritated, swollen, red, watery, and the like. It always signifies the presence of our beautiful Queen Liliu'okalani. Kamaka'eha. The sore eye. That has been our secret signal for years. Mahalo Ke Akua....Mahalo to you, my beautiful Queen...Onipa'a...