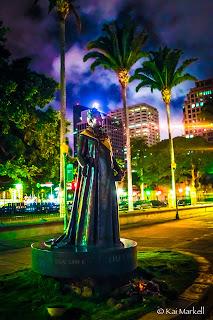 Elliott and I watched the hula performances at 'Iolani Palace before entering the palace itself to see the special night tours in Honor of Queen Kapi'olani's 182nd Birthday Celebration. We moved along inside of the palace to see each room and listen and watch performances. It truly was a Beautiful and Magical Evening. There were some special moments between Elliott and I during the tour, moments that brought us closer, and suspended time. It made the night even more Special for us.

When we departed, we headed towards where our car was parked. We walked out the back gate of the Palace and headed past Queen Lili'uokalani's statue. The area was desolate and not a Soul could be seen. As we approached her, I immediately felt the desire to speak with her, but first a chant arose asking permission to approach her Sacredness. No sooner had I begun my solemn chant, heavy and huge raindrops began to slowly plummet down from what appeared to be a clear sky. There were heavy clouds gathering in the distance towards Nu'uanu and Mauna 'Ala.

I continued chanting, awaiting the deluge of heavy rain which seemed like it was ready to explode from the Heavens. I had my camera out and on my shoulder, and thought that the rain would probably soak my camera, maybe destroy it. We didn't flinch, however, as we both stood there. Completing my chant as we were pelted with these large drops. I even pictured us running for nearby cover after my chant if the downpour arrived.

As I finished, right on cue, a Beautiful all-encompassing warm wind blew from the direction of the palace and enveloped the two of us. I had to brace myself a little because it was that powerful. Then as quickly as it started, it completely stopped. I looked at Elliott with a huge smile and said, "Wow...did you feel that? That was a direct answer. That was her."

He smiled and looked at me and said, "Wow...did you notice how the rain stopped at the end of your chant?" I said I hadn't because I was too busy noticing the wind. We both gazed upwards at the clear skies and canopy of stars and then both laughed in delight. I spoke to the Queen. Then we departed again, walking in silence to the car, reflecting upon the Gift we just had received.

Such was a Special and Beautiful Moment in Time. A shared Blessing and Gift. Between a Father and Son...and Their Beautiful Beloved Ever-Present Queen...