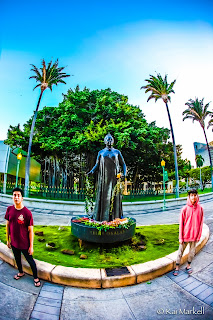 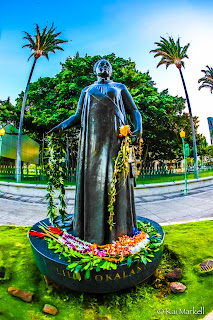 In the Aftermath of Graduation and an All-Nighter Project Graduation, we awoke from exhaustion late in the day, to make the Journey to Punchbowl for Memorial Day to Honor Elliott's Grandparents with an assortment of lei from last night to share in the Celebration with our Beloved 'ohana who rest in Eternal Peace. Unfortunately, while the National Memorial Cemetery of the Pacific had extended hours until 7:00 p.m. tonight to accommodate the influx of visitors on this Memorial Day, the gates closed at 6:30 p.m. and we arrived exactly at 6:29 p.m. and were denied entry. The boys were disappointed, especially Elliott who so loves his Grandparents.

It was a teachable moment. I asked Elliott to look into his na'au, his visceral instinct and Heart, and let me know what he felt, aside from great disappointment. After much contemplation and introspection, it was decided that the lei and flowers needed to go somewhere else. His grandparents love him so much and they know his Heart. He thought of Pauahi. He thought of Mauna 'Ala. Then he thought of our Queen. I told him when one door, or in this case, giant metal gate, closes, look for the signs.

So we visited our Queen. We spoke to her, thanked her, chanted for her, and adorned her with our Love. I asked Elliott what was the biggest issue to decide last night, at graduation. The one that consumed too much thought and drama in my humble opinion. He said it was to stand or sit.

Our 'ohana stands for any Anthem for any Country where other people have sacrificed their precious Lives for Love of Country. Yes, Elliott's grandfather was a career United States Marine Corps Officer and Vietnam Veteran. His great-grandfather, a WWII tank mechanic sent to Europe. His Great-Great-Great-Great Grandfather, was a physician who fought in the American Civil War out of the 144th Regiment in New York. He probably had to saw off limbs on the Battlefield. Interesting, Elliott wants to become an Emergency Room or Trauma doctor. Another Ancestor, George Roderick Markell, was born in 1754 and fought in the American Revolution.

However, another direct Ancestor, William Henry Harrison Huddy, born in Rhode Island in 1832, came to Hawai'i and married Waiopua Kane from Puna, and signed a sworn affidavit attesting loyalty to the Kingdom of Hawai'i.

I reminded my sons, that our Queen, loved the American People. The American Government, however, was a big disappointment. Sadly, it still is. Our Patriotic American ancestors, including my own Father, who sacrificed for his Country, remained disappointed in the direction the United States of American has taken. It has lost its course.

But there remains great Hope in its people. The Citizenry. It is never about Governments. It is always about the People. About Humanity. So take the Best lessons, and Seek, Find, Learn, and Celebrate the Best of People. Move Forward, in Remembrance, with Humility and Gratitude, to Forge a Better World. The Truth Shall Always Rise in Time. But never forgo your Values, Respect and Character for short-term gains. We are in it for the Long Run. Many of us will Leave this Earth before our Dreams are Fulfilled.

The Children Shall Finish Our Unfinished Dreams. So it isn't about whether you Sit or Stand. It is simply about Taking a Stand. For Something Meaningful in This Life. While Retaining the Essence of who you are. Your Character. Your Values. Your Love. Your Aloha...