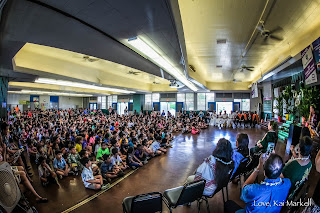 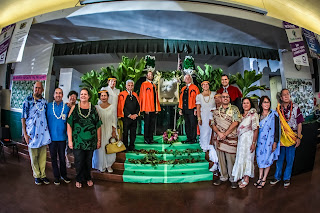 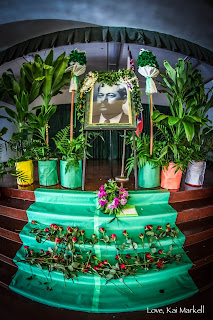 Today was a most Beautiful Day Indeed. Mayor Joseph J. Fern Elementary School hosted its First Inaugural Founder's Day since its establishment in 1924. Joseph J. Fern, born and raised in Kohala on the Island of Hawai'i became the first Mayor of the City and County of Honolulu where he served many years. He was Native Hawaiian. Kumu Wada of the Hawaiian Studies helped to organize the event with much help from the Administration, teachers and parents.

About 450 students from Kindergarten to 5th grade participated along with about 50 parents. Organizations participating and supporting the event included the Royal Order of Kamehameha I, Pālama Hawaiian Civic Club,  Office of Hawaiian Education-DOE, Office of the Mayor, and the Office of Hawaiian Affairs.

From the moment all the nicely dressed children started pouring out of the classrooms headed to the cafeteria for the celebration, the energy was palpable. Young smiling faces, excited to see the lei, kihei, pū'olo and other 'ālana. Greetings of "Aloha!" reverberated throughout the throngs of tiny bodies moving in unison.

From the ho'okani pū, the sounding of the conch shells, to the oli, the chants, the mele, the songs, and even a student assembled film on the Life of Joseph J. Fern, it truly was a Magical Morning. I was often moved to tears watching the little faces singing Hawaiian songs, or chanting the oli they practiced so long and hard to memorize and deliver to Honor their Founder.

The procession of tiny hands grasping Beautiful lei and flowers to place them at the foot of a portrait of Joseph. The room was filled with unseen, but felt, kūpuna of yesteryear, beaming with pride of the hali'a aloha, the loving memory, for not only Joseph, but all things Hawaiian.

Mayor Fern was Beloved in his day. A father figure, who didn't take sides, and who was a great listener and mediator. A true kanaka of the old days. Gracious. Dignified. He struggled with Diabetes, like many Hawaiians, and succumbed to the disease at Queen's Hospital.

In a World seemingly going mad, it was so Healing, Beautiful, Hopeful...to see such a diverse group of our Future. All together. Bound together by the simple Love for a Beautiful Man. Bound together by the Aloha Spirit of the Hawaiian Culture. There remains so much Hope for this World. We were humbly Blessed to bear witness to it this fine Morning.

And somewhere in the Universe, Joseph J. Fern, filled his Heart with Love, garnered from a Lifetime of struggle that suddenly made it all seem very much Worthwhile. All for the Children. Nā Mamo... 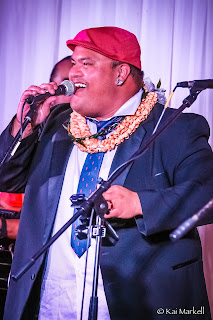