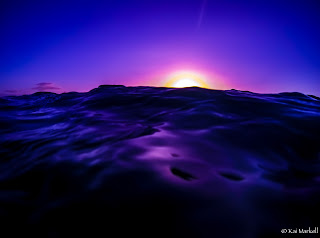 I always tell people that they should try to get into the ocean when we share and commiserate how exhausted we are, how tired and brain-fried we are, or when any of us feel drained and sickly. I always end with, "I'm really going to try and get into the ocean this weekend." Most times, I miserably fail, which is even more sad that I am Blessed to live in Hawai'i, and secondly, I am less than a half-mile from the ocean and one of the most popular swimming spots on O'ahu.

This past week, on Thursday, I was feeling particularly drained and weak, like I was slowly dying. I knew that I had to reach the ocean after work, regardless of any typical excuses, lest I perish. I have been told repeatedly that I am too exposed, too open, to susceptible to others draining energies. I had a recent incident at work at a large contentious meeting where I felt like I was Spiritually attacked, and felt the sharp implements simultaneously pierce my insides, and I almost bent over in reaction to the intense pain and depletion of my energy, but remained upright and unflinching as I returned to my chair and sat down. The last thing I wanted was to let anyone on that their attack, if intentional, was moderately successful.

I knew it didn't mean someone had ill-will towards me and was purposely and intentionally sending me harm, although that was one possibility, and I also knew that it didn't mean the person was even present in the room. All I knew was that my na'au told me it was a Spiritual attack. I have had them before, and have seen others attacked, and even know those who send. It is just a part of my Life, of our Hawaiian Life, when someone, out of resentment, envy, jealousy, or other dark needless emotions, mistakenly thinks that you have all this going for you, and they don't realize the power in their own words or thoughts, and if you leave yourself open, you get whacked.

I made a covenant with my God, that if He would help guide and deliver me through such incidents, that I would stay the course of Love and Light. A part of me would love to seek retribution and send back to destroy. This was the way of some of my kūpuna. We could end up destroying both of our selves in the end. I have always had a temper, and when my imu, my underground oven, is lit for war, I have to suppress such destructive rage and anger that wants to erupt.

In college, I once had someone intentionally cut me off on a highway on-ramp, then jam on his brakes to make me jam on my brakes, then give me the finger. I burned his face into my mind from the evil smirk in his rear-view mirror, and wrote down his license plate and model of car, and immediately began plotting my revenge.

I am embarrassed to say that every time I opened my ash tray in my car, to look for coins, I would see the little slip of paper, and the license plate, and as the anger of that day ignited each time, I would plot to visit his home, and burn his car. Slashing tires didn't seem enough. It was a horrible vision. And as years passed, every so many months I would come across that paper. The anger would ignite. I would envision my revenge. It would temporarily quell the fire until the next unexpected time I would come across that little piece of paper.

This lasted for a little over nine years, almost ten.  I even kept the little piece of paper when I changed vehicles to a newer car. I kept thinking revenge is a dish best served cold, and after a decade, it would be even more rewarding to incinerate his car. Then one day, at almost ten years to the day, as I looked at the paper again, I suddenly crumpled it up. I incinerated it with my car cigarette lighter. The pure insanity of it all pierced me in a moment of clarity. I humbly Thank Ke Akua for that moment of enlightenment and revelation. Of release and forgiveness. That could have led to Life-Changing irreversible tragedy. I humbly Thank Christ.

This is where I came from. This is not who I am now. I was once told by a well-known kahuna lā'au lapa'au, who was accused of taking someone's life intentionally, as he lamented the accusations, that people didn't realize that if he even went there once. Into the Darkness. That he would throw-away a Lifetime of Healing. All that he had built up, to bring Light and Healing, would be tragically discarded in a momentary lapse into darkness. Into pride. Into ego. Into false empowerment. Into violating the Sacredness and Sanctity of the Human Life. And I never forgot that.

So I made it to the Ocean as Twilight was descending over the Horizon. As little children laughed and splashed all around me in the looming darkness on a balmy Summer Night. As the rythmic sounds of Tahitian drumming in the dimly lit parking lot, a dance troupe practicing, echoed across the expanse of beach, and transported me back two-thousand years, I slowly entered the Realm of Kanaloa and thanked him in humble gratitude for helping cleanse me.

The piercing chill of the water worked its way up my legs, to my torso, with each step forward, allowing me to feel my numb and dulled body shocked back to Life. I then plunged head first into the cold water as my breath exploded underwater sending a shockwave all around me in a barrage of little bubbles. I then exploded back out into the now chilled night air and filled my lungs with the air I do desperately needed to breath again. To feel Alive again. I immediately felt Life enter me again as Spiritual baggage was swept into the dark sea.

I floated on my back as everything went silent. Water filling my ears. The initial underwater sounds of sand rattling and popping erased the sounds of the Living. I floated there in relative silence, listening to my own breathing, as I gazed upwards into a cloud filled darkening sky. So many faces appeared. Everywhere I looked. A pantheon of sentient Spirit. Until I locked eyes on one very distinct face. We just stared at each other in silence.

That Beautiful Divine Heavenly Face, let me know, without Judgment. That in a World that seems to have gone mad. That in the impending darkness and blackness descending upon that little beach in our little corner of the World. That we need to illuminate ourselves. To be the Love and Light. To be the Forgiveness, Tolerance and Compassion, that will Light the Dark Path. The Path that will Lead All of Us, Together, Back Home...