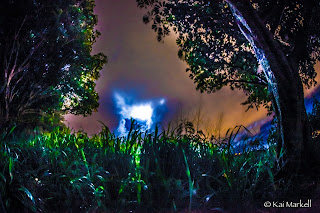 Today was a Beautiful morning spent at Kamehameha Schools Midkiff Library for the World History Interfaith Conference with the Sophomore class. The students rotated to different stations to hear different religious leaders speak about their personal Faith. Christianity, Hinduism, Buddhism, Islam, and Baha'i Faith were all represented today. I was Blessed to have been able to participate in all five stations and listen to the expressions of Passion and Spirituality.

Before we commenced, I found myself standing next to a large five-foot by four-foot original painting by the late Master Artist Herb Kane of the Battle of the Nu'uanu Pali. I had always seen the smaller versions but to see the detail up close was awe inspiring and humbling. Herb's research and 'ike were astounding. I absorbed every detail. The faces. The mahiole. The ihe, newa and leiomano weapons. The desperate faces plunging over the cliff in terror. I thought about my namesake, Keawe-Ka'iana-a-'Ahu'ula and his place and role in the battle.

Herb painted some blood on weapons and some wounds but kept the painting from being too gory. However as I looked at the painting, I began to see the true wounds. The gaping wounds. The eviscerated bodies. The bashed heads. The horrific injuries that fire hardened clubs, shark teeth, and barbed ihe laumeki spears inflict. The gravity of the sacrifices were so apparent that I quietly and surreptitiously uncontrollably wept.

After wiping my eyes, I joined the students in their first station.

It was such a Blessing to hear each speaker express their Faith and Belief in a Magnificent, Benevolent, All Powerful, Loving Spiritual Force in the Universe, interpreted in different ways. The same messages resonated from station and speaker, to station and speaker. The Betterment of Humankind through the Betterment of the Individual, through Love, Kindness and Compassion for each other. In the End, there were more similarities then differences, and an All Encompassing Loving palpable Spiritual Presence throughout the morning.

Let not the sacrifices of so many ancestors across the World of History, the suffering, the torture, the cruelty, the devastation and the sorrowful tragedies be in Vain. The wars shall cease. Let Love and Light Rule the World Supreme. I humbly Submit before You. You and I Possess the Power...