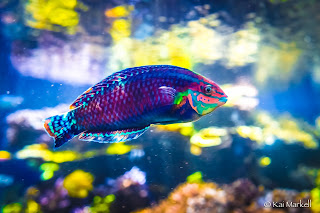 When I was younger and still in high school, I used to go down to Kalaeloa, then known as Barber's Point Naval Air Station, and spend time on the beach by myself. I would explore the reef and come across all kinds of interesting creatures. I had a salt-water fish tank at home and would catch cool creatures and take them home. When I tired of them, I would return and let them go back where I found them.

There was one section of reef that the fish would scurry down a channel and go into their hiding places whenever you approached. I learned that I could stick my hand at the end of the little channel and catch a Hīnālea, or wrasse, with my bare-hand by gently trapping the fish against the roof of the little hole and bringing them out. I never was sure if it was the same fish that went into the same hole, but I could always catch a Hīnālea in that hole, then release them.

At first, I was worried an eel would bite me, but I never encountered any eel in that particular hole. My biggest thrill was seeing families with little children exploring the reef. They would get excited at seeing grey schools of baby mullet and āholehole swimming around. I would approach them and ask if they wanted to see a Beautiful fish that I could catch for them with my bare hands. The children always seemed excited, but the adults often seemed incredulous.

I would proceed to walk around on the reef pretending I was looking around intently as part of my act. As I splashed with my feet, I could see the familiar pattern of fish scurrying down the channel to their hiding places. Arriving at my hole, I would place my hand down, and feel the Hīnālea hiding. I always could feel all eyes on me as I contorted my face like I was really concentrating.  Emerging with the fish in hand, I would carefully show the children and amazed adults the Beautiful Colorful Hīnālea. They were always astonished. I would the let the fish go and it would blitz away and disappear in a colorful flash.

I must have performed this feat around twenty-five times over the years. I often wonder how many children grew up remembering the Hawaiian boy who caught a Beautiful fish with his bare-hands for them. Remembering those days brings me just as much Joy and Happiness as the actual day itself seeing those Wide-Eyed Joy-Filled Smiles. Such is the Magic of Hawai'i...