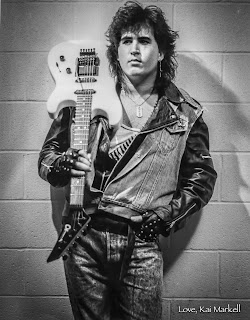 I was so excited to make the big announcement that I was asked to open the Def Leppard 2018 Hysteria Tour at their October 19th and 20th Honolulu, Hawai'i concerts. I even started growing my hair again. The concert promoters asked me about my hernia surgery. I told them that it should be over and done with by then and I will be all healed up.

They asked me if I could run and slide across the length of the stage. I said probably not, but I could jump around and scream. They looked at me dubiously.

Everything looked like it was a go. Then they asked me what my set consisted of and my repertoire. I unfortunately had to tell them...the only songs I knew how to play in their entirety...were you guessed it. Def Leppard songs. That killed the deal.

Now I am trying to find Bruno Mars's cell number...