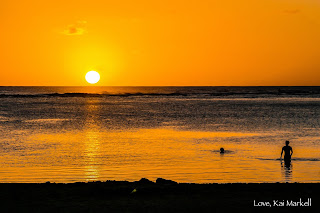 Tonight, amidst all of the things that I wanted and needed to do, I found myself reflecting upon all of the obituaries in my Life. Not the death notices of others, but my own. Many of them as I look back on my Life. I survived my birth. I wasn't aborted or stillborn. Mr. and Mrs. Markell mourn the death of their infant son who they lovingly named Ka'iana, and whom they affectionately call Kai.

I survived as a toddler standing up in the back of a VW Beetle and later a VW Bus. My Beautiful little cousin wasn't strapped in any car seat, as was common back then, and was catapulted through the front windshield of her family car. She died. Three-year old Kai Markell was killed today in a tragic car accident when he was ejected from the vehicle he was riding in.

When I was five, my father packed me on the back of his 10-speed bicycle and my right leg accidentally went into the back spokes and it snapped my ankle. Several weeks into my hospital stay, my bone wasn't setting or healing right and the doctor had to re-break my ankle. I remember my Father was so furious at the doctor in the hospital. Five-year old Kai Markell passed away today from blood sepsis from an ankle infection.

When I was seven years old, my father used to let me sit on his lap and steer our car down the curvy backroads of Okinawa dangerously close to the edge of cliffs and dodging water buffalo on the road. Today, Mr. Markell was seriously injured in a vehicle accident when the car his son was steering went over a cliff. Tragically, his only son, Kai, didn't survive.

At the same age, I used to run around the bushes of Okinawa looking for lizards, turtles and snakes with my friends. Today, seven year old Kai Markell of Honolulu, Hawai'i was bitten by a venomous pit viper, the notorious Okinawan Habu snake, and died shortly thereafter.

At age 10, I found my Father's .22 caliber revolver and his USMC .45 acp 1911 semi-automatic pistol and ammo. I was fascinated by them. Today, tragically, ten-year old Kai Markell was killed in a gun accident at his family home in Makakilo.

When I received my driver's license at age 16, I started five-years of wreck-less driving with wanton disregard for my own safety and the safety of others. So many close calls and dangerous incidents. Today, Kai Markell was tragically killed in a single vehicle accident two days before he was to graduate from the Kamehameha Schools.

After my first year of college, a best friend and I hung out during that whole Summer. We identified ourselves as hopeless losers. One night, he stole his grandfather's .22 rifle and we went out driving and shooting road signs along a deserted coast on O'ahu. Two nights later, he took rifle and shot himself in the head. He died when he was taken off of Life-support. It devastated me to my core. I had access to friend's firearms too. Last night, recent Kamehameha graduate Kai Markell was found dead of a self-inflicted gunshot wound. It came two-weeks after the similar death of his best friend and classmate. Friends and family said it was so unexpected. Services pending.

In college, I ended up hanging around some friends caught up in serious criminality and others who were part of their circle. I can recall some truly frightening and dangerous situations that make my heart race even today. Kai Markell, a UH Mānoa student was killed today during a raid on a house by the Drug Enforcement Administration when he was struck during a gunfire incident. His mother died shortly thereafter from a broken heart.

I used to frequent the Night scene of Waikīkī and Ke'eaumoku bars with a gang of friends. One Beautiful Samoan friend, 6 foot 5, a gentle giant, was always our muscle. He was tragically stabbed in the heart one night working as a security guard by a group of teenage punks. He died there. Kai Markell was tragically stabbed to death outside of a bar on Ke'eaumoku at the age of 22 after a confrontation with another group of youths.

I remember standing one night outside the bathroom at Sandy's beach park at about midnight under the full moon. I was in such an intense situation and a life or death conversation. I wholly expected someone to sneak up behind me and cap me in the back of my head right there. Tonight, a man's body was found at Sandy's beach park, shot execution style in the head. He has been identified as UH student Kai Markell who had just been accepted to the William S. Richardson School of Law. Police are investigating.

Law School itself was so intense and taxing. There were times I found myself at the darkest bottomless pit. UH Law School student Kai Markell was found hanging in the Hale Wainani dormitory this afternoon. Friends and family were shocked. Services pending.

While working after Law School at the Burial Sites Program, I found myself stressed, overweight, and in bad health as well as participating in many arduous and physically taxing site visits and inspections, and long hikes as part of my work. I remember many close-call incidents, including several deep in claustrophobic unstable lava tubes where I found myself stuck and pinned in narrow passages under loose ceilings, or close to falling while climbing with no real help around in case of a serious accident or injury. Today, a DLNR Burial Sites Program staffer was found unresponsive with head injuries deep inside a South Kona lava tube and died enroute to the hospital. The deceased has been identified as Kai Markell of Pawa'a, O'ahu. He is survived by his wife and two young sons.

In 2005, after starting work at OHA the year before, I suffered my first bout of pancreatitis. That same month, another 'ohana member and OHA co-worker was hospitalized on Kaua'i with pancreatic cancer. I emerged from my hospital stay. She sadly did not. Today, Kai Markell of OHA's Native Rights, Land and Culture died from an aggressive form of pancreatic cancer. I know now that even pancreatitis can be just as deadly.

In 2012, I suffered my second and almost terminal case of pancreatitis ending up on Life Support in the ICU of Queen's Hospital. Kai Markell, a Native Rights attorney at the Office of Hawaiian Affairs died this evening of massive organ failure. He leaves behind a wife and two young sons.

In 2014, before I had emergency heart surgery, my cardiologist told me I was a walking time-bomb with a 90% blockage in a main heart artery. I was walking to work and back home and suffering serious cases of angina pectoris which felt like heart attacks, causing me to have to stop and sit until the pain subsided. I didn't realize how precarious it was until my cardiologist saw the results of my stress-test and scheduled me for heart surgery two days later. He forbade me to walk to and from work anymore. Today, Kai Markell was found dead on the sidewalk on King Street after suffering a massive heart attack. Services pending.

The point of this exercise, is just to recall how precious and precarious Life truly is. There are many more times than these salient events listed where Death could have easily arrived for me to take me home. In reflecting upon all the obituaries that I could have had over my Life to date, how could I not be so humbly grateful at the Gift of Life? The Gift of Today and the Gift of Tonight? The Promise of Tomorrow? So many were denied these moments. I learned so much from each experience as I reflect back, and each has contributed to my mental, emotional and spiritual growth, and now, even my physical growth with a serious change in my dietary habits and easing back into exercise again as I await yet another surgery.

The biggest lesson for me, in looking back, is that Life truly isn't about dying. About how you die. About when you die. It really is about living. How you Live. Making the most of each precious moment. Filling each moment with Love, Light and Life. And realizing just how fleeting and ephemeral each of these moments are so we don't waste any of them on the things that really don't matter at the end of your Life, regardless of how long or short that will be. When you are given months, weeks, days, hours, or even moments left to Live. What flashes through your mind...and your Heart. That is simply what is truly important...