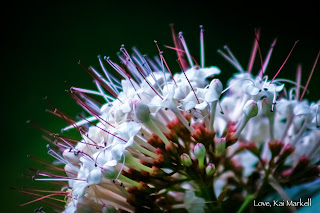 I was reflecting tonight about last week. I was sitting in my car one morning in the parking lot of a grocery store. I watched a Beautiful white blossom fall out of a tree and land smack dab in the middle of the windshield of the car parked right in front of, and facing me. Despite the wind blowing, the flower, about three inches across, stayed right where it landed, face down upon the glass.

I watched for what was probably ten to fifteen seconds in disbelief that it hadn't blown away or moved in the wind, then to my surprise, it lifted up and off of the windshield, turned around, and the plopped right back down, now facing me with the Beautiful blossom petals. Again, not moving in the wind anymore, still in the center of the windshield, and slightly rocking back and forth a little now that the conical back of the blossom was against the glass.

I immediately knew this was not natural as it went against the law of physics and was some kind of supernatural event that I was witnessing. I sat there, debating whether I should dig my cellphone out of my pocket while strapped in my seatbelt, which can be an arduous undertaking, to take a bad photo of the blossom through my own windshield to document the experience. Just then, I saw something dark on the flower appear, then disappear. I looked even more intensely at the flower, and saw a Beautiful bee emerge from the flower, crawling all around. I was even more stunned. That the bee was in the flower that descended, that stayed still in the wind, that flipped over to face me, then crawled out and around this flower, was surreal.

As I dug in my pocket to pull out my cellphone, the bee immediately flew off. The flower then was picked up by the wind and flew up and away and out of sight. Both were gone. I sat there savoring the inexplicable moment that I just bore witness to. I quietly thanked the Universe for such a Beautiful sign. To pay attention. To discern. I would usually just sit there with my head buried in my phone scrolling through email and Facebook and miss much.

There were other people walking around but she somehow caught my attention. She didn't look too disheveled, but carried a large plastic shopping bag in one hand filled to the brim. Her hooded jacket partially concealed her face, but I could see some dirty blonde hair protruding out. She stopped at times, kicking and examining some indiscernible thing on the asphalt with her foot while looking down, then proceeded to walk again.

In my mind's eye, I saw her suffering, maybe bitter and unsociable, and wanting to be left alone. She went to some trashcans and lifted the lids, poking around. I thought she was looking for plastic recyclables as I see many people do as they go through trashcans around town. She kind of reminded me of my bee the other day as she went about her busy business.

I was just about to stop watching her and check a text that had just arrived on my phone, when something nudged me to look for her again. I moved my rearview mirror over and saw her again, just as she had opened another trashcan. This time, however,  I witnessed her pull out a styrofoam plate lunch box and open it up to look inside. She poked her finger around a little and then put it back in the trash.

My heart and stomach sank right there. I knew much more about her situation from that little glimpse of her actions then the entire time I had observed her. I knew she was hungry and looking for food. Despite being glued to my car seat and weighed down from weakened leg muscles right now, I dug a twenty out of my wallet and opened my car door to get out.

It took me awhile to get up and out of the car with some effort as my groin area was swollen and sore. I glanced over and she had sat down on a table in the outdoor eating area of the store. I was glad that she was still there and I started walking towards her.

My mind was racing as I looked down at the parking lot with each step, thinking about what I was going to say to her. I am somewhat leery of giving money to homeless women after one bad experience where an older asian woman didn't take my gift but yelled at the top of her lungs at me, making people all around gawk at the evil man, me. I later realized that this woman, aside from exhibiting signs of mental distress, having observed her for several weeks prior on my daily route, may have thought I was propositioning her for sex with my money and reacted accordingly.

I knew from my time spent with another dear homeless woman, Meredith, that men would come late at night and proposition her for sex. It made me angry and disgusted.

So as I walked towards this woman, I figured I would just smile and hand her the bill and quickly say, "Please get something to eat." That sounded like a plan. I ran the scenario through my head several times as I got closer to where she was.

However, when I looked back up to where she had been sitting, she wasn't there. I quickly panicked and looked all around only to see her walking across the parking lot and gaining quite a bit of distance already between us. I had taken too long to walk to her and was too busy looking down and thinking about what I was going to say. Now I had blown the opportunity.

The only way I could catch up, as I couldn't walk much faster, was to yell out, "Excuse me!" to try and get her attention. The thought of that made my stomach churn as well as I didn't want to make a scene. I also thought that yelling surely wasn't a good approach if she truly was angry, hungry, unsociable, or didn't want to be bothered. I still hadn't gotten a good look at her face but I pictured a sunburned caucasian face weathered by exhaustion and the elements.

It was my last chance however, as she was gaining distance. Without thinking, and in desperation, I just blurted out, "Excuse me!"

To my astonishment, she turned and looked at me, and when she saw that I was talking to her specifically, she actually stopped and turned around, and slowly began approaching me.

I hobbled towards her, and extended my hand out holding the twenty-dollar bill in front of me as I continued to walk, and smiled as well.

To my astonishment, as she came closer, her face was not the worn-out weathered bitter face I had surely thought I had seen earlier. Her face was so young, smooth and Beautiful as she broke into such an Angelic and warm smile. I was stunned.

I handed her the bill and she grasped it, as I said, "This is for you. Please get something to eat." She just stood there with a look of astonishment, smiling, looking down at the bill and then back up at me. I was still somewhat stunned at how kind she looked. She actually reminded me of my late sister Nalani in many ways.

She said, "Thank you so much. God Bless you" as she broke out into an even bigger more Beautiful smile.

I started backing up, and smiled back and said, "You are very welcome, God Bless you too." I started to turn to walk towards my car, not wanting her to think I wanted anything else, or to engage her any further, lest I make her feel uncomfortable. I glanced back and she was still standing there, looking at me, still smiling. I smiled and waved to her. She waved and said, "Thank you again. God Bless you."

I smiled and said, "God Bless you too." I was still a little stunned at the whole encounter. When I got to my car, I looked back for her and saw that she had proceeded out of the parking lot and was walking down the sidewalk continuing on her journey.

I got back into my car, elated that it had all turned out so well. Then to my surprise, I then burst into tears. I just let it all flow out in the privacy of my car. Just overwhelmed by the sadness of it all.

I thanked Ke Akua for that sacred opportunity. For that encounter. For allowing me to notice something that I easily could have been blissfully unaware buried in the isolating technology of the modern day. But for having noticed, and for having had Divine assistance to help me see my intended vision to fruition, it was a Beautiful surprise to see such an Angelic woman where I had only initially seen a hardened bitter Soul.

When I close my eyes, I can still see her Beautiful Gentle Smile. I pray for her well-being now. And as Always, Grateful for the Lesson. Where we think we are often providing the Blessing and Gift to another. It is truly we, who end up Beautifully Blessed and Poignantly Gifted...