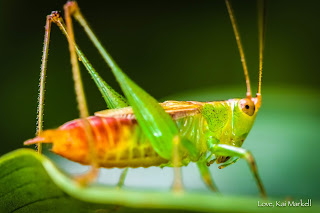 I made a new friend today. This grasshopper would not let me anywhere near him at first. He scooted around a leaf to the opposite side when he first saw me. I went to the opposite side and startled him, as he quickly moved back to where he first was trying to hide from me again. Every time I moved, he would move, trying futilely to hide from me and my camera. Around and around we both went. When I saw his hind legs flex, as if he was about to launch into the thick deep tall grasses, I quickly backed off and tried to calm the energy in the air down. Then he relaxed and we started our merry-go-round again.

He seemed to calm down and as I slowly approached him, he stayed put for the first time, just watching me intently. I then asked him if he would stay very still so I could take a portrait of him to put his face on Facebook and the Internet. He asked me what Facebook was. I said it was a Social Media Platform where people post photos and videos of themselves, others and life around them to show the World how they want the World to see them, and remember them after they are gone. It is a means to validate a Life, or so we all would like to think.

He quieted down and became somewhat somber. I asked him what was wrong. He quietly said that he may only live a few months, at the most, maybe one year if he doesn't get eaten by a bird or lizard before then. He said that he really didn't have much of a Life.

He then asked me about the Internet. I explained the best I could. I let him know what a "Digital Footprint" was and said that if he let me capture his portrait, that he would be on the Internet forever. Children and artists and others might search for "Grasshopper" decades or centuries from now, and his photo would be one of many to appear. Some creative Beauty added to the World may come directly from inspiration from his photo, from his Beauty, long after he is gone. A little bit of Healing for a World that who knows, Centuries from now, may need a Beautiful photo of a grasshopper. A photo of him. To keep the Awe and Wonderment of the Beauty and Fragility of Life going in the Hearts of young and old everywhere.

I could see a Twinkle in his eye. He said that I was the first human he ever met. He said he spent his whole life in a tall patch of grass and bushes only as far as his little eye could see. He always wondered what was beyond.

I showed him my phone screen and wondrous things in the World. He was speechless and quiet. Then he said that he felt so naive and deprived of a much larger World. I then Googled "Grasshopper" and showed him many, many grasshopper photos. He studied each one carefully, searching for a familiar face, but most of all for his Mother, who he said that he hadn't seen since birth. No luck. He didn't recognize any of the grasshoppers in any of the photos.

It was then that he agreed to let me take his photo. I told him that I would hopefully make him look as Beautiful as he was to me, as he truly was. He lamented that he didn't have any eyelids and that he always looked "surprised" according to his grasshopper friends. I told him he had really Beautiful eyes, even though the wide-eyed "psycho stare" of he and all of his friends is a little creepy and unnerving. We both laughed until we both had side pains.

I then quickly captured him. His image that is. I let him know that I would post his photo and that I wouldn't make up a big story about him, about how exciting his Life is for Facebook. About the giant birds that tried to eat him, that he valiantly fought off with fierce ninja kicks. About the time he jumped in the air so high that he touched the clouds. Or the time he ate two-pounds of grass at one sitting to win an eating contest. I would simply tell the truth about his simple Life.

I let him know that he doesn't need all the excitement and wonder and drama. Yes, he will live his entire Life on his little grassy plot without much excitement or adventure. Yes, he is one of billions of other grasshoppers. But the fact that he is Here. Alive. Kind. Compassionate. Humble. Grateful. And knows Love. A Merciful Love that doesn't seek to Kill and Destroy him. That is the Greatest Miracle of Life in and of itself. That is something he can be Proud of. That makes him Unique and Special. Truly One in a Trillion.

So this post is for you my Beautiful Little Grasshopper Friend. Thank you for your company on a hot sweltering day. Thank you for Trusting me with your Life to not jump away and flee. Thank you for being Honest about your simple uneventful Life.

For it Truly is a most Beautiful Miraculous Life indeed. Cherish and Savor each moment, big and small. Exciting or mundane. And you Shall Live Forever. In my Heart, Mind and Soul. As I Shall Live Forever in yours. We Shall Never Perish with Everlasting Life...