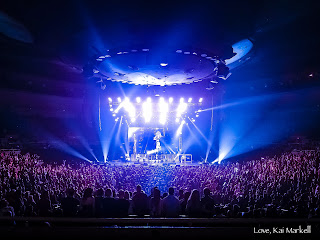 They say in Life, you should spend money on Experiences, and less on acquiring and accumulating Possessions. When you are at the End of Life, you will value Treasured Memories of Time spent with Loved Ones, experiencing moments, rather than looking at material possessions or any accumulation of so called Wealth.

With that in mind, I couldn't pass up the opportunity to attend the Def Leppard concert and bring along my two sons. My oldest son, Elliott, enjoys rock music and plays the guitar. He is starting to learn the electric guitar as well so I knew that he would enjoy his first concert ever. His younger brother, Koa, wasn't as enthused. He rather stay home and play computer strategy games with his friends. I made him go however. He had never been to a concert either.

My wife bowed out, unless Journey was going to play as well as they and Def Leppard did a joint tour on the continent. Journey opted out of Hawai'i this time. So I brought my good friend, John, who I have known for three decades and who always has been my drummer when I played rock music.

I, myself, hadn't been to a concert in three decades. I wanted to have an experience with my two sons that they would remember for the rest of their lives. As would I.

It was Awesome. Deafening loud. Just as I remembered from the many concerts I attended while in college. It brought back so many memories.

I felt a little foolish when I first walked into the arena with my bright orange ear plugs sticking out of my ears as we tried to find our seats. I felt even more foolish when I struck up a conversation with the couple next to me and we couldn't hear each other because the man, about my age, was wearing ear plugs too. We both had a good laugh.

I eventually pulled my earplugs out to enjoy the decibel onslaught.

Every emotion and memory I could muster cycled through my Head, and Heart, as the band erupted onto the stage and song after song rocked the arena. Not much changed in 30 years. There seemed to be more security now, and police officers walking back and forth watching the crowd.

One fight broke out down in front of us but was short lived. Another fight broke out way above us in the nosebleed section. Other than that, it seemed like everyone was in good Spirits.

I knew my sons enjoyed the Shock and Awe of it all. The music. The Star power. The lights and lasers. The smoke. The pounding drums. The distorted guitars. The bass guitar rattling your viscera as you sat there. The raucous combined voices of thousands of people screaming in unison. It was everything I had ever hoped for their first concert.

They both wanted t-shirts after, even Koa. That's when I knew that I had won him over.

I remember I used to drink alcohol with my best rocker friends before we went to the concerts in college. So many big name bands. Me always dreaming about one day being up on the stage.

I remember one concert, maybe Motley Crue, where I had worn my blue jeans which were bleached white. Glo-sticks were relatively new, and one broke and spilled all over my pants. My pants were then glowing. So I broke the rest of my glo-sticks and poured them all over my clothes.

I ran around the arena walkway, dancing, from end to end, back and forth, as the glowing man. I don't remember security or police being there, or anyone making me sit back down in my seat. This all from the guy who was so debilitatingly shy and self-conscious, that I couldn't strike up a simple conversation with a girl in college without my Heart trying to break out of my chest and losing my breath. Liquid courage at its finest.

Another time, I was headed to another concert, leather jacket, spikes and all. My good friend stopped in the middle of throngs of people walking on the grass and sidewalk to the arena, and pulled me on the side. He then lifted the back of his jacket and shirt, and I could see that he had a gun in his waistband. Loaded as I later found out.

We went to the concert and rocked out fortunately without incident. I felt extra secure that night as the fear of getting into a fight, or getting mobbed after the concert was always a concern. Truly the inane recklessness of a young delusional mind filled with bravado and a yearning for danger and excitement. I have learned, in my maturity now, to celebrate and seek the ordinary and mundane. Too much to lose in Life. Including Life itself.

We will be headed into Halawa and Waiawa Correctional Facilities in November for the observance of Makahiki Ceremonies with the inmates. I pass no Judgment. I understand the scourge of mind altering substances. The bad decisions that we all can make, of which fate turns the wheel, of which some of us emerge unscathed, while others end up forfeiting their Freedom and forever changing the Lives of everyone they ever Loved.

So in the end, my two boys had an Experience of their Lifetime. I was so Blessed to have Experienced it with them. My drummer friend John and I relived powerful Memories and revisited a time in our Lives that seemed like another Life and a distant past. A formative past however. I share true stories of my past with my sons, not so they emulate it, but they understand the important lessons I learned, hopefully to save them from making similar bad decisions.

One of the last songs the pre-show DJ blasted out of the speaker system before Def Leppard came onto the stage, was "Personal Jesus" by Depeche Mode, sung by Marilyn Manson. When I heard the refrain blasting, tears filled my eyes. I looked at my son Elliott, and mouthed the words, "What a ho'ailona..." I was thinking about my encounter with Freddie the other day. And my own Journey in Life.

And I was once again reminded that there aren't only Good and Bad people in the World. That each of us can be good, as we can be bad as well. There are thousands of choices in adolescence to be made on that precarious and formative Journey. I can only Pray that my two boys will continue to choose well. That is all I humbly ask for. They are my Life. They are my Redemption...

As we were driving home, I heard Koa in the backseat ask his brother, Elliott, quietly, "What was that last song they played before Def Leppard came on stage?" Elliott responded, "Personal Jesus." Then Koa punched it into his phone and saved it.