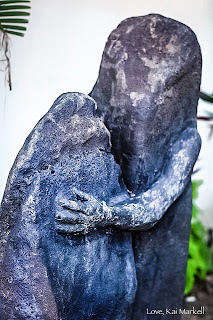 I don't remember the first time I tried hugs but I think I may have been a toddler. Hug addiction is real and it was my own family that fed my habit in my young formative years, leading me to experimentation with different types of hugs as I grew older.

In college, I became a chronic hug user and to support my growing habit, I started dealing hugs. If I stopped cold turkey, that euphoric feeling that kept me so high quickly dissipated. I violated Rule Number One of the hug dealer code. I was getting high on my own supply.

My workplace had a policy on hugs and prohibited them in the workplace, but I rebelled with wanton abandon and dealt hugs to my co-workers and even visitors. At some point, I became a major hug dealer in the islands, even sneaking hugs into the prison system where they were strictly prohibited. The guards could search me all over and never find where I stashed my hugs. The inmates couldn't get enough it seemed and really put the squeeze on me as much as they could.

I never discriminated in dispersing hugs, from wealthy powerful heads of government and corporations, to the homeless and abandoned on the street. Hug usage seems to have risen in Hawai'i and trying to keep the hugs pure and unadulterated as opposed to fake or synthetic, has been a challenge.

Some of my male hug dealing competitors have a code where they refuse to deal hugs to women or children. I deal to anyone. I even dealt hugs, regardless of sex, gender, race or ethnicity, to the sick and dying. And even once to a scared hungry stray dog. And, yes, I even distributed hugs to the bundled bones of my deceased ancestors by the hundreds. My name is Kai Markell. I am a Hug Dealer. This is my Story...