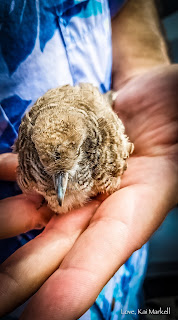 Today, while driving in traffic, I happened to see a young Zebra Dove sitting in the middle of the road as cars passed over her, including my own. By the time I looked in my rearview mirror, I confirmed it was a bird and saw movement. My Heart started racing as I couldn't stop but had to keep up with the flow of traffic.

I quickly plotted my route to go around the block and come back to the bird. There wasn't much parking near her but I would try to find a place to park so I could get out and try to save her.

My thoughts turned to another young Zebra Dove that I saw in the road while driving a few years ago. I rushed around the block again, parked and exited my car. As I came upon the bird, it was no longer alive as I had first seen it. I picked up her little lifeless body as her entrails poured out. Someone had clipped her with their tire in the short time it had taken me to get back to her. I was devastated. I buried her in the bushes on the side of the road.

Then there was another young Zebra Dove in the middle of the road up at Kamehameha Schools. I successfully rescued her and brought her home, only to have her die later that night while I was watching and holding her. I actually cried.

As these thoughts raced through my mind, I kept driving until I made my way to where I had last seen her. She was still there, huddled, and in the same place.

I parked and rushed out into traffic. The stoplight was fortunately red. I walked up to her, watching out for oncoming cars, and gently lifted her up into my hand. She had been trembling and kept closing her eyes.

I know many people in their cars were fixated on what the man was doing walking out into the middle of the road and traffic.

I noticed many Grey Doves on the sidewalk not too far from her.

I took her back to where I was parked and gently stroked her head and back while talking to her. She didn't have any visible injuries. I wasn't sure if she hit a car, or was sick and not feeling well, or just scared.

I held her for about twenty-minutes talking to her, and she seemed to be getting more alert and attentive. She would slowly open her eyes, look at me, and then close them again. I envisioned White Healing Light coming down from the Heavens and blanketing her, Healing her Physically, Emotionally, Mentally and Spiritually.

Finally, having to continue on my Journey, I found a nice little sheltered grassy spot underneath a Beautiful flowering hedge.

I placed her down and she immediately stood up and started walking around in a little circle, then laid back down again. I watched her for a bit.

Then peripherally I saw something flutter past us and land on the ground near her. It was a large Zebra Dove. She started walking towards the little one and the young bird perked up and stood up, walking around in a circle again.

I really had to go so I bid them farewell. I'm not sure if that was her Mother who swooped down. In any case, she wouldn't be alone.

It made me so Happy. Knowing that when you are scared, seemingly trapped, feeling sickly or dying, or otherwise desperate, that someone out there can pick you up, embrace you, provide Love and Shelter. Refuge. Hope.

I know what it is like. I have been exactly there in the past and not so distant past. I have been the recipient of such Life-Saving Love and Refuge. Ever so Grateful. Love you All...