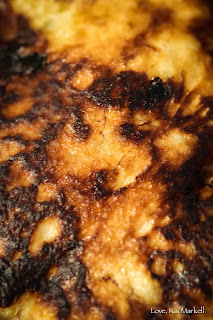 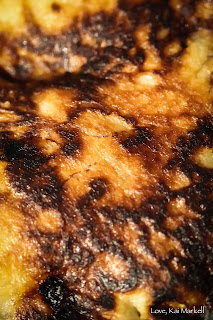 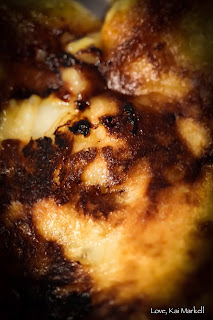 I made pancakes for the family this morning. I made myself one giant banana pancake as the bananas were overripe, brown and starting to liquify.

I first noticed a small gnat buzzing around my face while I was still in bed this morning. I thought it may have been a family member visiting me from Beyond the Veil as usually happens with small flying creatures.
I later realized that the gnat was trying to get my attention and led me to the bananas. Thus I made banana pancakes.

Before I dug into my slightly overcooked pancake, I notice two distinct dog faces and also Freddie Mercury, the Lead Singer of Queen with his shades and large mustache.

The dogs looked like my Mother's beloved Chihuahua mixes, one who passed away before she transitioned, and who, while on her death bed at home in Hospice, appeared to her, waiting for her on our living room couch. I could see no dog, but the day before she passed, she could see our dog.

I believe the other dog has also transitioned since then.

Tonight, I grabbed my camera to upload the photos to the computer, but stopped by to show Elliott the pancake images first in the bedroom. He smiled and laughed.

Then as I walked into the living room to sit at the computer, blaring on the television program guide channel was none other than Queen, singing "Crazy Little Thing Called Love..."

I had to go back into the bedroom and share that sign with Elliott who smiled and shook his head, maybe in exasperation.

I can understand the doggies visiting from Heaven and the connection to my Mother. Not sure however, about Freddie Mercury showing up. Maybe my Mother wanted me to know that this "Crazy Litle Thing Called Love" truly transcends all Space and Time, and is Eternal.

Or maybe she just wanted to tell me to stop being such a Queen...