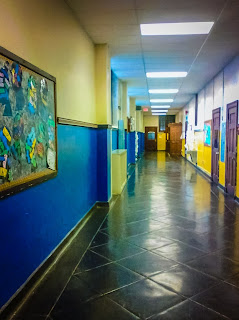 I stumbled upon this photograph on the Internet of the school hallway at Bregy Elementary School in Philadelphia, Pennsylvania. I attended Kindergarten there when my father was stationed in Philadelphia while in the USMC as we lived in Naval Housing.

I remember this exact hallway as the photo is taken from the perspective of the Principal's Office and Administration looking down towards the exit sign which leads left, and out onto the large asphalt black-top where we all played at recess time.

I remember recruiting about twenty-students, mostly Kindergarteners and some 1st graders to follow me quietly into the hallway during recess. We slowly tip-toed down the hallway towards the offices, trying to suppress our giggles and laughter. When we were about ten-feet away from the office, someone screamed and then we all screamed and ran as fast as we could towards the exit like a stampede of wild boars.

We immediately dispersed out onto the blacktop and blended in with the crowds. The principal came out of the doors not too long after us, and scanned the blacktop with a frown on his face while we sneakily peered from behind bodies and playground equipment. It was so exciting.

Well, the excitement and adrenalin rush was too addicting, and the following day, I again gathered a posse of little tykes, both boys and girls, and initiated operation "sneak, scream and run" again. It was again mostly a success. Unfortunately, however, someone screamed when we were only at the halfway mark of the hallway but the resultant yelling, laughter, and foot stomping echoed throughout the building.

On the third day, my little brain wasn't developed enough to understand predictability, patterns or the intellect of the school administration.

We again gathered during recess, entered the hallway as quietly as we could, hearts pounding with excitement, suppressed giggles again, and made it all the way to the office doors. Someone screamed, we all screamed and all turned to run down the hallway in another stampede when we caught sight of our principal, standing at the end of the hallway, between us and the blacktop playground. Between us and anonymity. Between us and freedom.

We were rounded up like cattle and all sent to the office for processing. Quite a few frenemies outed me as the organizer of the mayhem. When I got home that afternoon, my Mother was none to pleased about the telephone call from the school and my apparent path to delinquency.

We were all laughing uncontrollably until one car stopped and the driver angrily got out and ran towards us slamming the fence. We ran away like scaredy cats, dumped the evidence, and that was the first and last time we tried that tomfoolery which lasted less than an entire minute.

My last memory is going to the bathroom while Kindergarten class was in session. The bathroom was actually inside of the classroom and I raised my hand to request permission from my teacher to relieve my tiny little bladder.

Having been granted permission, which the whole class bore witness to, I went into one of the stalls, which had no doors and stood there doing my business. I soon found myself daydreaming, realizing that it was much more fun to be in the bathroom stall, letting my mind wander, then being back sitting in class and getting called on to answer questions.

I think I had spent an inordinate amount of time in the bathroom, lost in thought, just standing there, because a classmate came in, another boy, and stood at the stall entrance, startling me, and said, "Ms. Bear want's you to hurry up and return to class."

Where upon hearing this, I quickly turned around, gyrating my hips, and pretended to pee on my classmates feet.

He quickly ran back out into the classroom as I was pulling up my pants. To my absolute horror, I heard him yell to the entire class, "Ms. Bear! Kai pointed his birdy at me!" All I could hear was raucous laughter, boys and girls.

I was so horrified and embarrassed to return to class which was only about ten-feet from where I was standing.

I think I stood motionless for a few minutes trying to delay the inevitable. I slowly began to move towards the classroom door, quietly, as not to draw attention. All sounds had stopped and it was quiet as a Winter forest.

I stopped just short of re-entering the classroom, and peeked slowly around the door frame to peer into the classroom, hoping my classmates were busy writing or drawing and distracted. To my horror, the entire class was quietly sitting there, staring at me, waiting for me to come out.

I know I turned red and flush, as I made my way to my seat and desk, looking at the ground.

I could then hear giggling and snickering around me.

Ms. Bear admonished me by saying, "Mr. Markell, we need to have a talk after class about inappropriate behavior." This of course, elicited, more snickering and giggles.

I sat there with my head down for the rest of the class. Just me an my Tweety-Bird.

So when I look back on Kindergarten, I took away three big lessons.

One: If you are going to play "sneak, scream and run", make sure you pick random days, not consecutive days;

Two: Don't use a pea shooter unless you can back it up with mean Kung Fu skills;

Three: While I still Daydream in the bathroom, I never pointed my Birdy at anyone ever again...