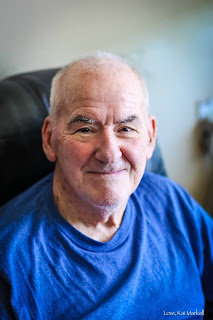 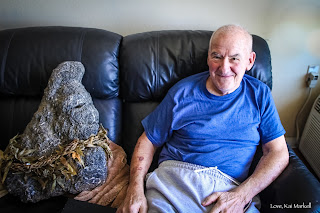 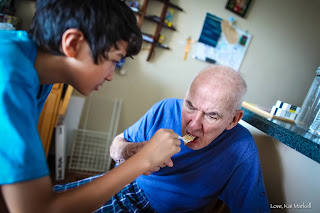 September 11th each year is a poignant and sorrowful day of remembrance. For those who celebrate a Birthday on this auspicious date, celebrations of entrance into this World can be overshadowed by the horrific images of that day buried into the Minds and Hearts of those who bore witness to the events as they happened.
We remember the thousands of Lives lost and the Bereaved Family members and Loved Ones left behind in the wake of the tragedy, as well as those Lives that continued to be taken years after and directly related to heroic efforts to forsake one's Life for that of a stranger.
I celebrate my Father's Birthday and Remembrance with as much Love and Gratitude as I can. After these photos were taken in June of 2014, to celebrate his rescue and return to Hawai'i, little did I know that Dementia would claim his life in less than seven months.
Although he could barely speak one or two words at a time, straining and stuttering to speak as his brain tried desperately to search for a word and allow his mouth to speak it, he was just as frustrated as we were in an inability to effectively communicate, beyond facial expressions and lots of gesturing.
I will remember, however, the longest sentence he manage to speak, in those last seven months of his Life.
As we were sitting on the couch, next to each other, alone, just enjoying his arrival back home and having my wife and his grandsons there with him as well to welcome him, he rested his hand on my leg and looked over to me.
I could see his lips trembling as he began to try to form words. Then he looked in my eyes, as I held his hand, and said, stuttering, struggling and straining with each word...
"Can....I....stay....here....with...you...forever?"
Tears welled up in my eyes, and I looked at him, as I squeezed his hand, and responded. "Yes Dad, you can stay here Forever. You are safe..."
In my Heart I knew that our apartment was too small already for our family of four, and the boys needed to be in school, my wife worked, and I had ultimately taken off a month from my job to get him situated and settled.
He had combative Dementia, and was still strong of body. A former Marine, he had already been wandering around the apartment creating temporary chaos as things were moved or disheveled. Pulling off his diaper. He needed twenty-four/seven care. He was like a two-year old again. We couldn't properly care for him at home.
So when I answered him, that he could stay here Forever, I knew that meant here in Hawai'i, with his family. I also knew that Forever meant that when death arrived, he would be placed with my Mother, who sat in our living room, her iwi, her bones, in a lauhala pū'olo, in her favorite recliner, watching us as we spoke about, and in front of, her.
So Birthdays are about Life. I believe the best way to Honor both the Birth and Death of Someone, or even Thousands of Precious Someones, is to Remember them with Love. To speak their Names. To tell their Stories.
And in doing so, may we become even better Human Beings, through the Reflection of what this Life's Journey is all about. Experiences. Lessons. Of Sacrifices. For Love.
Life is all about Sacrifice. Chosen or not. But such sacrifice that plants the hua, the seeds, for growth allowing us All to Blossom into Better Human Beings and to Cherish, with Humility and Gratitude, each Precious Moment of Life.
Into the Creation of a Better Kinder and more Compassionate Loving World, is a Sacrifice, and a Life, Truly Worth Celebrating and Truly Worth Remembering...
That is how we can Honor the Dead. Whether thousands. Or just one.
Happy Birthday Father.
Love and Miss you...