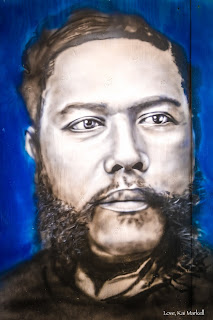 I remember being at Mauna 'Ala with some gifted friends and some mural artists seeking guidance and inspiration. This was many years ago when Kahu Bill Maioho was still there, resting in his home, as we quietly sat outside of the Kamehameha Tomb, assembled on the grass, as light drizzling rain sprinkled from time-to-time.

Mōʻī William Charles Lunalilo was the first to appear. He quietly roamed the outskirts of the tombs along the fence line. Contemplative. Silent. Seemingly heavy in thought. It was interesting for him to appear as he isn't buried at Mauna 'Ala but possesses his own Royal Tomb at Kawaiaha'o Church far down below the sacred lands of Ma'ema'e where we sat.

Mōʻī Wahine,  Lydia Liliʻu Loloku Walania Kamakaʻeha, or HRH Queen Lili'uokalani was next to make an appearance. She expressed her deep gratitude for the large mural that had been recently painted at Honolulu Community College in her Honor and how much it truly meant to her.

I sat there, looking at the ground, as her words flowed through a gifted friend, just awed to be in her Spiritual Presence, all teary-eyed, as I contemplated her words.

It was then that she made a humble request. She said that she is greatly humbled and Honored for all the prayers, wishes, tributes, remembrances, ceremonies and celebrations in her Honor. She couldn't express a deeper sense of gratitude. Her only wish, however, was that an equally magnificent mural be painted of her Beloved brother, Kalākaua.

She lamented that history doesn't always look back on her brother's Reign with the same Love that she receives. Often some of his actions as Mo'i are disparaged, as is he. She wanted nothing more to Honor her brother for all the good and great things he did for the Hawaiian people, when he could and while he could. His birth was prophesied as one who would help save the Hawaiian culture.

Next to appear was Queen Emma Kalanikaumakaʻamano Kaleleonālani Naʻea Rooke who is buried right there at Mauna 'Ala in the tomb we were next to. It seemed that Queen Emma still had some hurt from the Royal Election of 1874 when she lost to King Kalākaua and there was much consternation by her supporters at that time and hurtful actions all the way around. It was as if Queen Emma was trying to Heal the hurt between her and Kalākaua given Queen Lil'uokalani's wishes to Honor her brother.

An ancestor of one of the artist's present appeared with guidance and messages, as did Kamanawa, one of the twins on the State of Hawai'i Seal, who offered his appreciation and guidance regarding a recently painted mural of he and his twin brother, Kameʻeiamoku, in Kaka'ako.

We ended the visitations with humility, prayers and gratitude.

In reflecting upon King David Kalākaua's life, I understand that we are all here to learn our lessons for our Immortal Souls. Lessons often include our shortcomings, perceived failings, challenges, good and bad decisions, and habits and vices. It is all part of the Human Experiences for our Soul's Journey.

It is much harder when your decisions and Life's Journey, can impact tens or even hundreds of thousands of others. That is such a tremendous weight to bear.

Whether you believe that King David Kalākaua died tragically and suddenly in San Francisco of natural causes, a stroke, kidney failure, deliberate poisoning, or simply died of a severely broken Heart given the catastrophic loss and changes to his land and people, his passing was a true loss for the Kingdom.

I think the amazing mural painted of Kalākaua is long gone having been painted over with another mural. The photograph above is from a more recent mural that sits on a plywood privacy fence for a vacant lot in Kaka'ako slated for development.

It too will eventually disappear. If it even survives the vandalism and graffiti in the area which several other beloved and notable Hawaiian historical figures have already suffered along the same wall.

What will never disappear, however, is the fond Aloha, humbling Gratitude, and Eternal Love I have for King David Kalākaua, his Beloved Sister Queen Lili'uokalani, and all the Ancestors who lived their Lives, the best they could, trying to make a difference for all those unborn as of yet.

Happy Birthday Mōʻī Kalākaua. Rest in Love. You did Well...