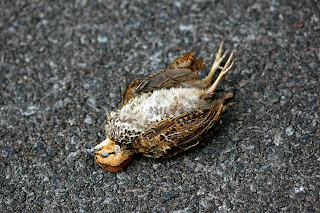 Hiamoe Loa. The long sleep... My father and I came across this poor dead pheasant chick on Mauna Loa Road on Hawai'i Island. The mother was hanging around in the bushes watching over her baby probably confused at why the chick wasn't following her like her others. There was no visible sign of trauma. Most likely a car whizzed by but I'm not sure what happened. We moved the chick to the side of the road so the mother could grieve and to provide some dignity to the little bird body. I'm not sure birds grieve however. I know mated pairs often are inseparable and once a mate gets hit by a car, the other despondent mate flies to and from the deceased bird until all too often, the living mate also becomes a victim of another car and joins their loved one in death. Beautifully reminiscent of Romeo and Juliet, I don't think it has much to do with love as we know it, although I would like to think it did.

This bird reminded me of another little bird. In December, I was driving home on O'ahu and waiting in traffic on Kalakaua Avenue where it joins up with Beretania Street. As the traffic moved forward at the intersection, something small and dark caught my eye peripherally. I looked in my side mirror and to my horror, I saw that a Dove chick was in the middle of the road, huddled alone on the painted divider. I saw the car behind me approach and the tire was about an inch from the bird. The bird waddled to safety a few inches away. My heart stopped and I saw the progression of non-stop vehicles behind me, whizzing precariously past the little bird in both directions, as the bird shook and rotated in a confused circle. I figured the bird made its first attempt at flight and glided down only to land in the middle of the street.

I had no choice but to drive as afternoon traffic began to move. I thought about driving around the block and then past the bird again, stopping, opening my door, and scooping the little bird to safety. I realized however that traffic was too slow and it would be too long to circle back around the block. So I pulled into my building and parked in the loading zone. I got out and proceeded quickly to the side street and over to where I last saw the bird, about 75 yards away. I kept thinking about how I would have to take care of the bird, feeding it, until it was old enough to fly away.

As I came around the corner, I strained to see the bird. My heart was pounding and I feared that I would only see a dead crushed bird. I caught sight of the bird, motionless, still in the meridian, as cars whizzed by on both sides. I imagined the bird was paralyzed and frozen with fear. I also saw what I assumed to be the mother fly down from a nearby tree, land by the little bird, and then zoom back up to the tree as cars came dangerously close. I was more determined than ever to save the bird.

I finally arrived at the curb across from the little feathered bundle sitting on the yellow line. I looked both ways and waited for cars to pass in my lane and then ran to the middle of the street watching the oncoming cars in the opposite lane. I know drivers were wondering what I was doing standing in the middle of the road.

As I approached the bird, she was still huddled but motionless. I thought she might have gone into shock but I was relieved to have made it to her.

I quickly reached down to gently scoop her into my hands and deliver her to safety. Elated. As I picked her up, I noticed her eyes were closed. And as I lifted her up, her head fell to one side. Then to my horror, trailing underneath her were her na'au, her guts. Just hanging down from her little lifeless body. I actually cried. I was so close. She must have just been clipped by someone's tire.

I carried her across the road while cars slowed down to avoid hitting me. Hiding my tears from the traffic. I was sick to my stomach and a feeling of dread came over me. I put her in the bushes and walked back home. So disappointed that I failed to save her. Thinking I could have acted faster. Moved faster.

For days after, whenever I drove past that spot in the road, I felt sick to my stomach. It stayed with me for almost a week. I couldn't believe it had such an impact. Tens of thousands of baby birds die everyday. I knew that. But I still felt sad passing that area. For my little bird.

At some point, I realized that when it is your time, it is your time. And the mother bird was probably saved from an equally tragic death being hit by a car as she flew back and forth between the tree and her baby. So maybe that was Ke Akua's plan. To save the mother. And teach me a lesson.

I don't know if birds grieve. I don't know if birds love. Or if their affectionate behavior is just pure instinct which creates such human like actions in birds. But I do know one thing. Humans have an endless boundless capacity to love. And although that little bird had a short life. Unlike countless other little birds who die everyday in equally tragic ways, that little bird knew love. Unconditional love. If only for a brief moment in time. I know she felt me coming for her. Desperate to save her. Because I loved her. She knew I was coming. I just know it. And to leave this world, and know that someone truly loved you with all their heart is all you can really ask for in this short unpredictable beautiful amazing journey called life...