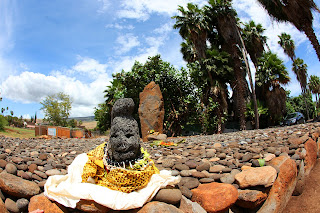 Moku`ula means sacred island. This island and village was home to high chiefs and their community from the 16th to 19th centuries, serving as a political and spiritual capital for the Hawaiian Kingdom. It is known as a piko or spiritual center of life. The lizard goddess, or mo`o, Kihawahine is said to guard the fresh water springs that gave life to native plants and fishponds that sustained the village. The community was built in a circle with the royalty in the center and surrounded by their chieftains, who were then surrounded by their caretakers and villagers.

Hawaiian Ali`i (ruling class) can trace their ancestry back to a time when gods walked the earth. Pi`ilani was a high chief who lived at Moku`ula in the 16th century. For hundreds of years his familial line was tied to Mo`o Akua, or large lizard-like gods. When Kala`aiheana, daughter of Chief Pi`ilani, died at a young age, she was deified. She became a Mo`o Akua, the sacred and powerful supernatural lizard goddess known as Kihawahine. It was her presence at Moku`ula that increased the power of the land and of the people who resided there.

The power of Moku`ula attracted royalty from other islands, as well. On the Big Island, King Kamehameha I was not born as a high chief. In his efforts to unite the Hawaiian Kingdom under his rule, he needed to marry into a higher line than his own. He sought after and married the high chief of Moku`ula's daughters, Ka`ahumanu and Keopuolani, who were descendants of the Pi`ilani line. Securing his familial ties, Kamehameha I then is said to have harnessed the energy of the lizard goddess at Moku`ula, and through the use of Kihawahine's power, then united the Kingdom of Hawaii.

Here, the Pohaku Wānana o Pai'ea reconnects with Kihawahine and pays his respects to the late Akoni Akana who put much of his Ea, or life and breath, into the restoration vision for Moku'ula...