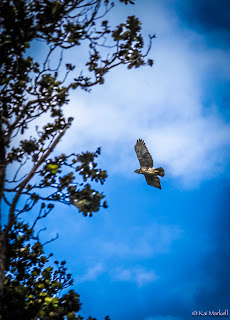 On my recent trip to Hawai'i Island to start cleaning up my parent's home in Volcano, I was hoping to get a lot of the cleaning of the home and yard done early enough to go over to the Mauna Loa road above Hawai'i Volcanoes National Park and spend some much needed time of solitude and reflection in the forest with my camera. I really was hoping to see the two 'Io, or Hawaiian Hawks that appeared the last time I ventured there. It was such a powerful and timely Hōʻailona...not one 'Io, but two, and the younger one flew onto a tree branch about twelve feet in front of me and sat there screeching and looking around. Every time she looked directly at me, chicken skin erupted and I tried to photograph her looking through my camera viewfinder with tear-blurred vision. When I saw her one eye was injured, I immediately knew the connection. Kamaka'eha. Our Beautiful Queen Lili'uokalani. I will never forget it.

On this trip, I ended up so busy and so exhausted, as during the drive up to Volcano from Hilo, I experienced a long bout of what I suspect is angina pectoris as my chest was heavy and burning with shooting pain. I think it was the stress of still dealing with the aftermath of the relatively recent death of both of my parents and beloved sister. I had another episode at one point during the day in the home as well.  I openly and loudly conversed with my Mother, Father and Sister, as if they were in the home right next to me as I tried to deal with an overwhelming amount of personal and family ephemera and belongings. It took me so long because each photograph I picked up, each letter, each document, even souvenirs, mementos, curios, and seemingly mundane thing elicited strong memories and I held them and pondered their value in saving or discarding.

It seemed like an overwhelming task and I often had to sit down and rest because so many emotions filled me. So many decisions to make. On top of that, many things of sentimental value were missing from the home apparently stolen during my Father's Dementia and unauthorized entry into the home by people will ill-intent to take advantage. I had to change the locks because I had no idea how many people had keys because my Father's new wife let people come into the home indiscriminately and help themselves to family things as they had no value to her and my Father couldn't speak. It really made me upset.

I stopped by the Volcano Store to buy a drink and saw a flyer posted for a reward for someone who shot an 'Io in Volcano Village. The bird survived but will never fly again. It made me mad and sad at the same time. I had never seen an 'Io in Volcano Village in thirty years of going back and forth to my parent's home although others probably have. What a Blessing, and to have someone shoot it down.

I went back to the house and finished cutting grass and weeds with an electric weed-whacker, and every time I ventured too far, the cord would pull tight and I couldn't reach the areas I needed to. So I kept attaching extension cord to extension cord to allow me cover the whole yard and driveway. I was exhausted after and realized that I needed to take a shower, and head down to Hilo to catch my flight home. There was no time or energy to visit the Mauna Loa Road forest with futile hope to see my 'Io again. I knew it was a slim chance to absolutely none given the probability not in my favor.

Right when I was about to enter the garage to go upstairs, tired, sweaty, covered in grass clippings, I heard a loud screeching, and looked up, and to my amazement, not one, but two 'Io came soaring over my neighbor's home, and landed in a tree right on the street in front of our home. My heart pounded with excitement and disbelief. I could feel tears welling up in my eyes as I bolted up the stairs in the home to find my camera. I quickly switched lenses and ran up another flight of stairs and out onto the highest deck. I strained to look through the trees towards the tree where I saw them land. Looking for any signs of movement. Nothing. I sat down quietly in the chair on the deck and listened intently. Nothing. I thought they probably flew off while I was in the house climbing stairs and looking for my camera. I sat there in quiet reflection. Humbly grateful for such a Beautiful and Meaningful Hōʻailona. I felt my parents. A sign of encouragement. That I was doing the right thing despite so many lingering doubts and guilt. It was an affirmation for me.  To never stop believing in the Magic of this Beautiful World. To know the Unseen. To see my parents finally free of so much pain and disappointment in this Life. To Soar with Each Other. Still madly in Love.

And just as I was about to go inside the house to take my shower and head down the hill, I saw this Beautiful Majestic 'Io quietly and quickly soar from one of the tall trees in the front yard where he must have sat unnoticed to my prying eyes. And in the only open space and quick moment, I lifted my camera and took one photo before he disappeared. I was so sure I didn't capture him because he was so fast through the tree canopy and my camera was more likely to have focused on one of the many swaying tree branches than a bird flying through the trees.

I excitedly looked at the camera viewfinder of my one photo, and zoomed in to see the 'Io in focus. It wasn't my imagination. I was moved to tears again in humble gratitude. The World is absolutely filled with Blessings and Gifts. If we only close our eyes, and open our Hearts...