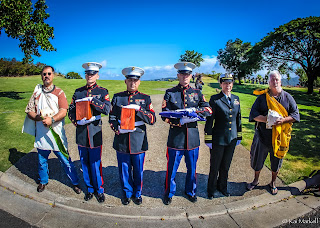 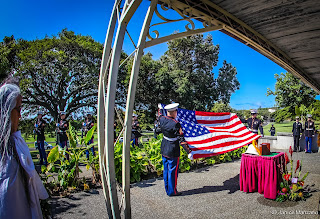 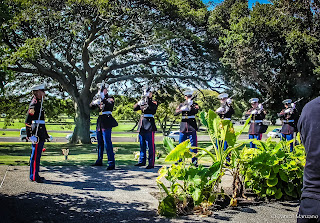 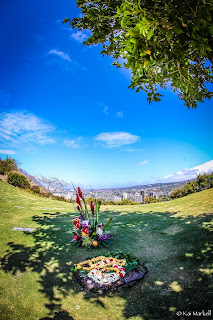 I thought about all the things in the past that I gave to my Father. As far as material things...not very much I'm afraid to say. I was even horrible at filling out holiday cards. The one thing that remained constant throughout our Lives, however, is that I always gave him my Love and Respect. There were things that I truly wish had occurred differently at times, but such are the strains and trials that forge the Human Spirit into valuable lessons for our Souls.

He gave so much to his Country, after 31 years of service in the United States Marine Corps and tours in Vietnam. Towards the end, he felt let down my his Country, for losing so many values that he grew up believing in. He fought corruption at the highest levels of the United States and sought Justice in a one-man, and one-son, crusade that stole over a decade and a half from the quality of his Life and that of my Mothers. He yearned for the recognition of his Honor and Character in the End. His two Meritorious Service Medals as a Lieutenant Colonel in the United States Marine Corps, now awash in the broken fragments of his memory and decreased functioning as a victim of merciless Dementia.

Despite the seemingly overwhelming obstacles in the last few years of his Life, including my 10,000 mile roundtrip to rescue and retrieve him, we managed to give each other the precious gift of unconditional Love and Healing Laughter. It truly can salve the most broken of Hearts. I am humbled to tears that with the help of such Beautiful Souls and Friends, like Eda and Walt Kaneakua, and with the Loving Support of so many Friends and Family, including my FB 'ohana, that we were able to give my Father, and my Mother as well, as a career military officer's wife, the appropriate Military Honors, and a most Beautiful Final Resting Place at the National Memorial Cemetery of the Pacific at Punchbowl, to kanu, or bury them, in the ground, overlooking many important wahi pana of our lives. Makakilo, Camp Smith, Tripler Hospital, Kamehameha Schools, Mauna 'Ala, and so many others.

Still dealing with my own Health issues, and overwhelming kuleana and stress, everything was touch and go until the very last day before the planned reinterment and a ground plot became available. I had to seize the moment to take care of this kuleana and promise to my parents. Even some close 'ohana missed the event because I didn't communicate effectively in the ever-changing scenario. For that, I am so truly sorry and ask for forgiveness.

I am awaiting the installation of their engraved marker. Having a choice of many, many engravings to look at it, one became quickly apparent. Knowing that a rare Love that could withstand the ravages of time, and salvage the Heartaches of Human Frailty, should be Honored, I chose, "Together Forever." I know the thought of being separated from each other would be too much for two enraptured Hearts to bear. Love you Mother and Father. Happy Father's Day to All...