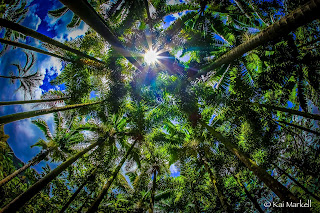 In 2010, when we brought my Mother home for Hospice, she passed away in less than three days. I remember how we had the local cable channel directory tuned in and on our television because they had such a Beautiful assortment of Hawaiian music. So many classics and traditional songs, kind of an easy-listening backdrop to such a poignant situation at the End of Life. The music softly played in the background, stirring up memories of time, places, different parts of the islands, and a variety of musicians' familiar voices, some gone, some still here. Visions of hula dancing and family gatherings were also evoked. It brought comfort to my Mother, as well as the rest of the family as we went through this most difficult of times.

When my Beloved sister, Nalani, passed away in Hospice, in 2013, during my visit with her, I would often turn the same channel on and have the Hawaiian music softly playing in the background during my time with her and the family. Again, the music was comforting and soothing.

Then when my Father ended up in Hospice the following year, 2014, I again had the cable guide on the television and the non-stop Hawaiian music filled the room as my Father lay there listening, trying to remember his Life, and trying to remember who he was, and who I was, until the very sad ending. There was a deep familiarity as he listened to the songs that we grew up on, that he used to play on his old reel-to-reel tapes, where I first heard Gabby Pahinui and other icons.

Of all the Beautiful music that played, it was the array of songs by the Brothers Cazimero that seemed the most Beautiful, Epic and Spiritual during these profound times. To hear their arrangements, their voices and harmonies, the sublime and intense Mana of the songs, was like being in a Church without being in a physical Church. Many songs evoked a Divine power of the deepest parts of our Beloved Hawai'i and often resonated in the Deepest parts of my Soul, transporting us through space and time.

So today, when I continue to listen to the cable channel, the music provides a soft backdrop to my Life, and everything I hold Near and Dear in this Life. Special songs come on and bring back a flood of memories. The incomparable Cazimero songs still are very Healing for me as they transport me back to a time of being physically right next to my Mother. My Sister. My Father. In the last moments of their Lives. When what Truly Matters in this World becomes desperately apparent. Love. Compassion. Kindness. Forgiveness.

So I thank you, Robert and Roland, for the Gifts you have given not just me, but to all who Love Hawai'i. With Deep and Humble Gratitude and Appreciation. And to you Beautiful Brother Roland, I know Mother, Father and Nalani will be some of the first to greet you and thank you personally for your Gifts to our 'Ohana. Love you Both Immensely...