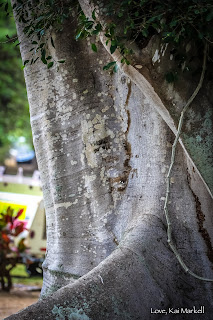 In Hawai'i, many burial sites were marked by trees. Tamarind trees on various islands have been noted to be a common burial or burying ground marker. Coconut trees were used too. Sometimes when I see a face on a tree, I wonder if it is a manifestation of the Sentient Nature Spirit residing in the tree. Sometimes I wonder if it could be a person buried beneath the tree, manifesting a physical presence. Some of course, are simple Pareidolia, but discernment is important when viewing trees or rocks with anthropomorphic features.

I remember when I received a call from the Catholic Diocese of Honolulu regarding a situation at the Roman Catholic Cemetery on King Street next to One Archer Lane. Upon visiting the cemetery with a Vicar, we noticed that a large old plumeria tree had roots that apparently went down deep, and then turned back towards the surface. When the roots grew back up, they inadvertently brought human skeletal remains up with them which were exposed on the surface now. We gathered them up and reburied them the next day.

When One Archer Lane was being built, there were about fifteen to twenty burials discovered just on the outside of the cemetery proper. No markers or headstones. As was common back then, if you weren't allowed to be buried inside of the cemetery for various reasons, people would often come in the dead of night and bury loved ones along the perimeter.

I remember stopping by the sales office of One Archer Lane one day and feigning interest in the project.  They had a mock up of the building in their sales office. I noticed the adjacent cemetery was depicted as a green park with grass. Nothing about a cemetery.

I asked the project sales lady if the green park was actually a cemetery. She responded yes. I then asked if any remains were found on their side of the fence, under their project.

She said, "Oh sometimes remains end up outside of the cemetery fence. They scoot over. It was just a shoebox size amount."

I left thinking to myself, we wrapped about 15 to 20 individuals in unbleached muslin and put them in lauhala 'eke, or baskets before reburying them in a large empty family plot inside of the cemetery. Who wears shoes the size of pick-up truck?