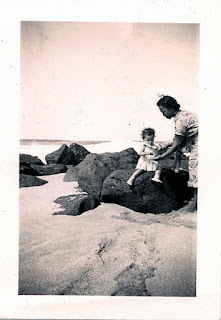 My mother, father and I went to visit Moloa‘a on Kaua‘i when I was about ten-years old. Our ‘ohana had a house there and it was one of my kulaiwi in Hawai‘i. The places where my ancestors lived, loved and were buried. It was my first trip there and the memories were magical. At one point, my mother and father took a walk on the beach while I stayed in the house with my Aunty Julia and Aunty Aggie. I fell asleep and when I woke up, my parents had returned. My mother looked a little flush and red in the face with puffy eyes. I heard my father telling the story of what happened.

My mother and father were walking along the sandy beach, and my mother was picking up little shells as they walked. Then all of a sudden, my mother collapsed to her knees and began sobbing uncontrollably. My father didn’t know if she was hurt or was having a medical condition and rushed to her. She was alright, just sobbing from deep emotion. He consoled her, and when she was able to stand after her weakened legs recovered, they made their way home. Mother had no explanation for the intense sadness and grief that overcame her at that spot on the beach.

I never forgot that incident. About ten-years later, my parents were doing research at the local library on an unrelated issue. My mother came across a newspaper article from 1941 on microfilm. There was the article that described her father, Frederick Miggins, drowning at Moloa‘a Bay on Thanksgiving Day in 1941. The article described how he was unresponsive, and how he was dragged up onto the beach by my grandmother and others. Then the article mentioned that his four-year old daughter, my mother, was there on the beach.
My mother didn’t have any recollection of that tragic day. After reading the article, we understood why she collapsed on that portion of the beach. I honestly believed that my grandfather waited for her that day. To give his little girl one last loving hug goodbye. Something he wasn’t able to do the day he died. His embrace filled her with so much emotion that she broke down. I remembered that we had visited his grave in Ko‘olau Cemetery on that trip and my mother was emotional seeing his name etched into the cement slab.
Fast forward over 30 years, and I had to make a trip to Moloa‘a for work regarding a traditional trail, an ala loa, which my ancestors and ‘ohana had used for fishing and gathering deep red limu kohu, a precious seaweed. At that site visit, I took time to go see the family cemetery. My beautiful Aunty Linda took me to go see my ‘ohana and especially my grandfather. I hadn’t been to his grave since that fateful trip with my mother when I was a young boy. I didn’t remember where the grave was.

I entered the small Ko'olau Cemetery and walked over to see the burial site that was pointed out to me. As I stood there looking at his name etched into the cement, I was suddenly overcome with emotion and began sobbing uncontrollably, bending over, and slightly convulsing. My Aunty and co-worker quietly walked away and gave me space and time alone. I was somewhat embarrassed but eventually regained my composure.
I didn’t know much about my grandfather at that time. What he looked like. Anything about his life. All I knew of him was from the newspaper article from 1941. But I realized that I came to see him. His grandson. To remember him. To reconnect. To mourn his passing. All he could do at that moment, was to embrace me. To hold me. And the unconditional love I felt was unlike any love I had ever felt before. It had pulled my deepest emotions to the surface and let them explode and pour forth in a Beautiful display of Love, Gratitude and even Sorrow. Just like he did with my mother, his little girl, on the beach, in sacred and powerful Moloa‘a.

When my mother was in hospice at home on Hawai‘i Island in 2010, she saw many people on the other side of the veil before she passed away to join them. She even had caught glimpses of her father. Walking back and forth. Patiently waiting. To truly hold his little girl for the first time in his Life. Love you grandfather and love you mother. See you someday...