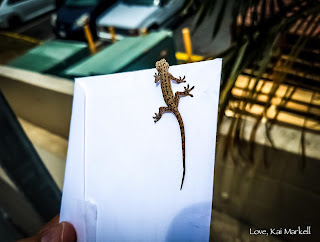 I went into the Long's Drugs by my physician's office and then was waiting in line at the cash register. A few people were in front of me. Suddenly, a little Polynesian girl, about six or seven years old came directly in front of me and held up a candy box with a lizard, or mo'o, perched on it. She looks excitedly at the older woman standing in front of me, as she holds the candy and lizard up in the air, and says, "Look Grandma! Look what I found!"

The grandmother frowns and gives here a funny face then looks away. Undaunted, the little girl then picks up the lizard by her tail and holds her up inspecting her while many looked on. My heart stopped, as I thought the lizard's tail would break away, as they often do, as the lizard, who looked listless and sickly up until that point, wiggled frantically back and forth hanging upside down.

Thankfully, she put it back down on the candy box. Seeing as most people in line began averting their eyes from the little spectacle, I told the girl, "Wow! It looks like you made a Beautiful friend!" No sooner had I said that, my arms erupted in goosebumps. A clear sign from my Spirit Guides that there was more here than meets the eye, and to pay close attention.

She looked up at me with a big smile then started gently petting the lizard's back. Next, she and I noticed that her grandmother was now finishing paying the cashier. The little girl then got down on her hands and knees on the floor next to her grandmother and put the candy box on the ground. She tilted it and the lizard slumped onto the floor. Her grandmother, now finished, admonished her to put everything back. The girl picked up the candy box and ran to put it back onto the shelf, then she ran after her grandmother who was now exiting the store, and she jumped over the lizard as she ran out the doors.

My heart stopped again as the lizard was now laying in the middle of the floor where the entrance was and people were walking in and out. The mental image of someone stepping on the lizard and squishing it quickly made my stomach sick. Although I was up next for the cashier, I put my items on the belt, and took the envelope I was holding and quickly walked over to the lizard and squatted down. Me trying to squat down, in my current condition, created quite the spectacle for all the customers, especially in the middle of the store entrance and exit between the two busiest registers. I thought I might lose balance and actually fall over.

With only one free hand, I placed the envelope on the floor in front of the listless lizard and quietly whispered under my breath, "Come on Sweetheart, climb up. Let's go."

To my astonishment, the lethargic lizard crawled onto my envelope. I stood up, not without quite a bit of painful awkwardness, as my knees were already locking up, and returned to the register just in time to pay for my items. The cashier and people behind me pretended not to see the envelope and lizard in my hand after I had created the little spectacle.

I walked outside and looked for the nearest greenery, tree or bushes, which were quiet a distance, to place her upon. I walked all the way across the parking lot and as I was about to put the envelope next to some bushes, I wondered if this lizard was supposed to come home with me. I lamented that I didn't have the time or energy to care for her right now and decided to let her choose. I placed the envelope near a palm-like leaf and she immediately crawled unto it. Slowly and laboriously, but she crawled. There was my answer. If she had stayed on the envelope, I would have had to bring her home and tend to her.

I wondered if she was sickly, but thought that maybe she was just stuck in the candy area and the cold store air conditioning might have made her listless. I also thought she might be dehydrated and thirsty too so I asked her to stay put while I walked back across the parking lot to my car, and then all the way back again to sprinkle some water on her and the leaf. She immediately began slowly licking it up. It was then I noticed her big Beautiful gecko eyes.

As the wind blew, the leaves swayed back and forth, giving her alternating Sun and shade. I had so much to do and needed to get home to lie down again. So I said my goodbyes and professed my Love for her.

I'm not sure if she recovered or not. I have a sinking feeling that she may not have survived her ordeal. But I was still Happy inside. We all have to depart at some time. If I were her, that would have been a Beautiful and Loving way to go. Grateful again for the Experiences, and most importantly, the Lessons...

fillikir72518 said…
A powerful share, I just given this onto a colleague who was doing slightly analysis on this. And he the truth is purchased me breakfast as a result of I discovered it for him.. smile. So let me reword that: Thnx for the treat! However yeah Thnkx for spending the time to discuss this, I really feel strongly about it and love studying extra on this topic. If potential, as you change into experience, would you thoughts updating your weblog with extra details? It is extremely helpful for me. Huge thumb up for this blog put up! free online casino slots
November 1, 2018 at 6:44 AM