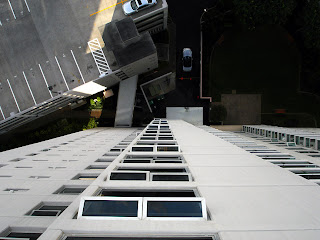 Somebody jumped from an apartment in my building to his death. An older man who lived by himself. On an early Sunday morning. Other residents heard the loud thick pop when he landed. One friend's four-year old son ran to look down from his lanai and said, "Man fall down. Hurt." Unfortunately, the man was beyond hurt. Several years ago a woman jumped from our sister building next door. A female security guard found her crumpled body in the bushes the next morning. Nobody knew. The guard was extremely affected by that incident and quit shortly thereafter. When I heard the news of the man in my building. I tried to figure out who he was. What he looked like. Had I known him at all. Did I regularly pass him in the lobby. Did I run into him in the mailroom. Did we share the elevator on trips up and down. Wondering if I quietly ignored him or extended myself to say "hello" or "how are you today?" Small time guilt trip. From the descriptions of the security guards. I thought I knew who he was. A quiet friendly elderly gentleman who sometimes sat outside on one of our benches because it was cooler than his apartment. I would often say hello and engage in a few words of small talk. Always a pleasant conversation. I couldn't believe he would take his life but I hadn't seen him in awhile and he fit the description.
About a week later, I was across the street in Foodland and walking down the aisle when I looked up and passed right by this same old man. He looked at me and said hello and I walked on in shock like I had just seen a ghost. I turned and looked down the aisle and he was gone. Seemingly too quick at his elderly pace. I turned and went back down the aisle and started walking back and forth, looking up and down adjacent aisles. He was nowhere to be found. My heart started to race. I made it up to the check-out counters and scanned all around. Then suddenly I saw him in line buying eggs and some other food. I stood there confused but relieved that my apparition couldn't be an apparition because he was now buying food in line. Now I didn't know who had jumped from my building. I was happy it wasn't my apparition friend because he seemed like such a nice man. I now regularly engage him in conversation when I see him to ensure he knows he is loved, appreciating him more now after thinking I had lost him.
But I still feel sad for the man who did jump and wonder if I could have had any opportunity to ease his pain, in big or small ways. I still don't know who he was or what he looked like. Such a drastic decision. Always a quick escape from the pain of life but leaving behind even more pain in the world for those who survive with the carnage and loss. I know the news doesn't report suicides to avoid putting the idea into the heads and minds of fragile viewers. But I know people who have exited life this way and I've heard of many more from other first hand tragic accounts. We will never know the true extent.
Just the other day, the Hawaiian man who approached me unexpectedly and engaged me in stories of his life, expressed sadness at his daughter's good friend who just graduated high school and who just took her own life. All over boy problems and a broken heart. So senseless. If we all truly knew how many people take their own lives everyday. I think we would all treat each other with a little more kindness. A little more Aloha. And make the extra effort to smile to strangers and ask them, with true caring and concern, "How are you doing?"...