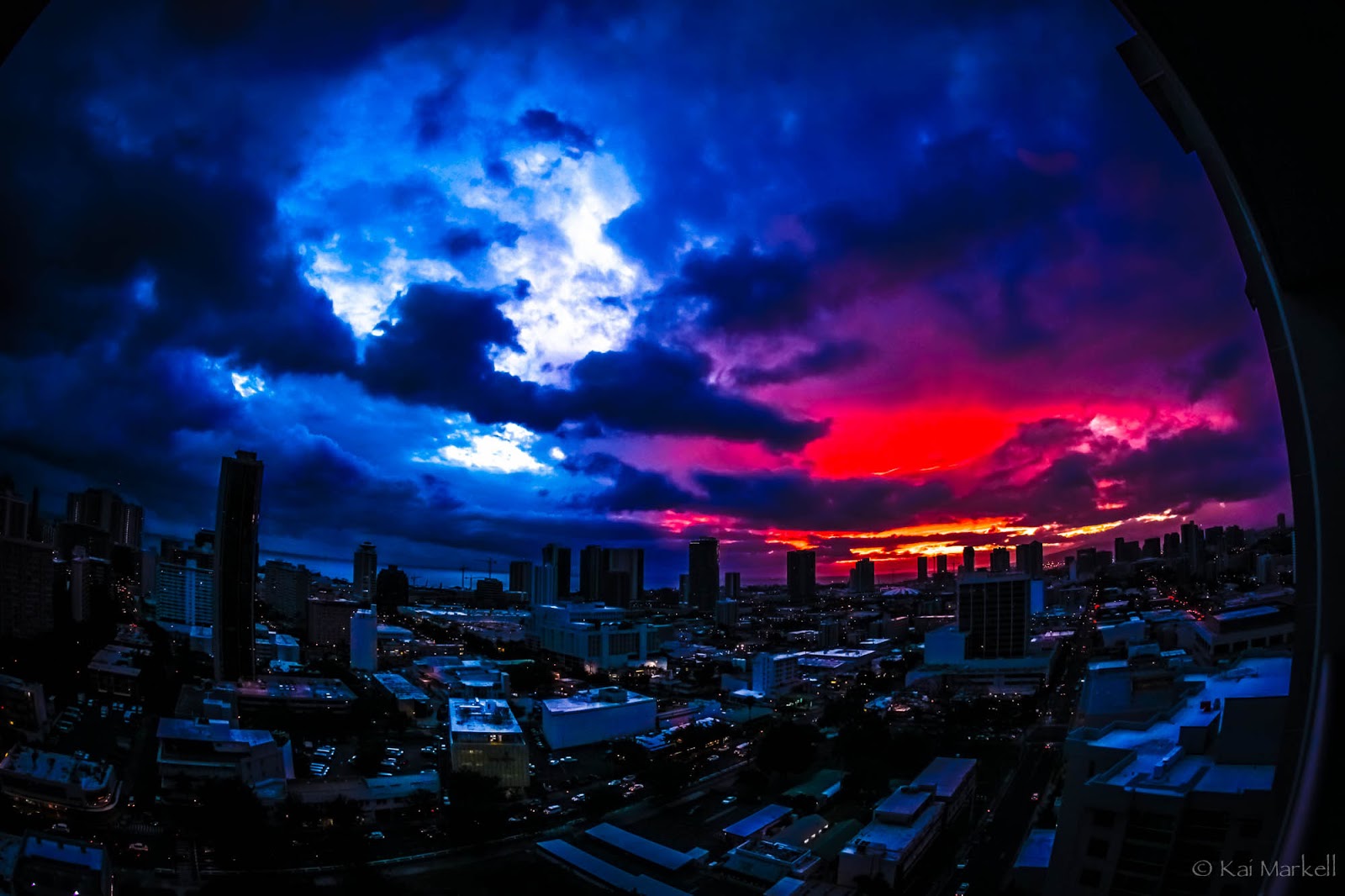 Last Friday, I walked home again. I expected an uneventful stroll at the end of the day, needing to get home to take care of lots of things. I looked forward to the exercise as well as the unbridling of work stress. I almost made it home without incident. Almost...

As I was approaching Pensacola Street, I heard a commotion up ahead. There in my view, was a couple of tents on the sidewalk in front of Kaiser Hospital. I could see a few young men poking their heads out of the one tent, as a blonde woman with headphones and a shopping cart screamed at them. She alternately waved her arms wildly about, and often turned to yell at cars stuck in afternoon traffic.

She stood in the new bicycle lane, and alternating between yelling at the men in the tent, and the people sitting in gridlock, who were all too happy to step on the gas as soon as the traffic started to move. Some even rolled up their windows as they approached where she was standing. All I could make out in the yelling, which was somewhat incomprehensible, was "I'll f@#*ing kill ya!" I thought to myself, "Oh great...here we go..."

As I approached closer, I braced myself for anything. The woman started pushing her cart, now towards my direction as I closed the gap. She made direct eye contact with me, and I looked straight at her. She started coming towards me, wild-eyed, while still yelling, and singing loudly to something only she could hear in her headphones. As she tried to push her cart up the driveway from the bike lane, and up onto the sidewalk, which would have put her directly in my path, I watched in slow motion as her cart began to tip, and then slowly fell on its side, spilling most of its contents all over the sidewalk. Traffic, again stopped in gridlock, filled King Street, and I could feel all eyes watching the spectacle.

The woman, looked down at her World spilled on the sidewalk, and looked at me as I was just beginning to pass her. She had this look of disgust and exasperation all at the same time. I really was exhausted and in a rush to get home, feeling like a newly hatched sea turtle, trying to get to my oasis. My ocean. My Home.

I could have easily kept walking at my pace and I would have soon been at the crosswalk which had just turned allowing me to cross. Leaving that whole chaotic scene behind me. But I stopped. I stood there momentarily, my mind frantically churning options and weighing risks. Then I shut my brain off, and listened to my na'au. My Hawaiian heart and guts.

I quickly turned, and walked over to the woman standing by her disaster, and said, "Let me help you get that up." She stared at me wild eyed. I grabbed the cart and began trying to stand it back upright. There were a couple of suitcases still in it, and I was surprised that it seemed to weigh a ton. Seeing that I was struggling somewhat, as the wheels kept moving the cart out from beneath me, she bent over and we both lifted it, struggling, back on its wheels. With my manhood now bruised, I then walked over to the sidewalk, and picked up papers, blankets, toiletries, a pillow and an assortment of clothing. I could feel lots of eyes on my back from drivers and passengers stuck in gridlock again. I dare not look at them.

After I piled up her things back into her shopping cart, with her helping to smash them down, she was still shouting, and singing, and dancing to her headphones. I looked at her and smiled, mouthing, "You should be okay now." Not knowing whether she could hear me or not. She was still shouting things, and I heard, "I'll f#@%*ing kill 'em!" She said that a few times. I looked at her unfazed by her violent musings.

She approached me and grabbed both my hands in hers. It was the first time I really got a good look at her. She had bright blue eyes, dirty blonde hair all frizzed out. She had on lipstick and her mascara was smeared down her face like she had been crying recently. Her skin was dried out from relentless Sun exposure as she stood there in a tank-top and sweatpants. I could only imagine what has happened to her on the street. Her rugged face still possessed the foundation of the Beauty she was, and really still is.

As she held my hands, she danced around listening to her music, and then came in for a hug. I sometimes worry about communicable diseases, drug use, hepatitis, and other issues when dealing with people on the street, but there is nothing I can do. I just put my Faith in my Spirit Guides to protect me.

We embraced.  I squeezed her tight. She pressed her breasts against my chest and buried her face in my shoulder for a moment. I held her for a little while. Trying to exude as much Healing and Calming Love and Light into her. But then the thought of the gawkers in traffic, thinking, "Look at that man taking advantage of that woman" entered my mind and I released her.

She looked up at me again, and I looked straight into her eyes. She began to talk loudly again, and I looked at her and said, "It is going to be alright."  She stopped shouting and dancing, and stood completely still, while still holding both my hands. I said again, "It is going to be okay." She looked at me and in her teary eyes, I felt like she found a little part of herself again. The part that used to be her, before the street tried to take away everything she ever loved about herself. Just for a moment. She was that innocent girl before the horrible darkness consumed her.

Then we separated but she still hung on to my hands. She started dancing again, singing out loud to her music but I had to let go of her hands. I could only imagine the spectacle on King Street of those gridlocked drivers fortunate enough to have such a scene playing out on the sidewalk.

I walked backwards for a bit, as did she, back to her cart. I waved and turned away for the last time to continue my . As I passed the tents, one of the young guys stood up and looked at me smiling. He said, "What the heck was that all about?" I smiled, and said, "I don't know. It's all good." He laughed and said, "That is one f#@%ing crazy lady."

I turned to continue my journey still thinking about that encounter, and what it meant. I also lamented that I seem to be a magnet at times and chuckled to myself. As I approached the next intersection, I saw up ahead, an elderly man, kind of portly, always unshaven, and always standing outside of his building looking at everyone passing by.

For about three years, whenever I passed him on those days he was there, I would smile and say "Hello!" He never once acknowledged me. Sometimes smoking his cigar, he would pretend not to notice me, sometimes turning his head in the opposite direction. I think one time, he looked right at me, with a blank expression. He seemed European to me for some reason. Maybe Middle-Eastern even. Sometimes he stood on the Jack-in-the-Box stairs, with his cigar, overseeing his Domain like an alpha-lion.

To tell the truth, after about my thirtieth  time saying hello to him with no acknowledgement, I was ready to give up on this guy. There he was again however, standing by a tree between the sidewalk and road. I was still riding the high from my encounter with my lady friend, and as I passed him, I looked at him and said cheerily, "Hello!" He briefly looked at me, and nodded his head down in recognition of my greeting. That was it. A head nod. Victory! I was so elated inside that I thought about skipping across the next cross-walk, knowing how ridiculously foolish I would have looked to the traffic waiting for the light. I chuckled to myself at the mental picture of a 250lb man skipping along like a 5-year old. I was so happy however. I knew I had a big grin on my face, and the people eating their Jumbo-Jacks probably looked at this idiot walking by, grinning and congratulating himself.

I knew that I will get a "Hello!" back from him soon. Then I will work on getting a smile. Some people collect stamps, coins or baseball cards. I collect smiles. Sometimes I have to search a long time to get the one I want.

I don't know what his Life has been like, so I don't pass judgment. I don't give up either, however. There are too many invisible people on the street. People who pass each other looking down at their feet. People afraid to talk to each other. It is important to be seen. To be acknowledged. To the invisible, they sometimes have to shout and yell to be noticed. They have to dance in the street. They have to yell outrageous things. Just to get people to look at them. Just to get someone to hug them with no expectations. To just have someone look into their eyes and truly see them. The real them. Because they are still in there. Spending a Lifetime searching for themselves. And waiting for you to find them. Hoping you will find them. Before it is too late. And they end up lost to even themselves.