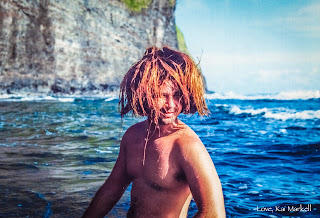 Today I am Honoring and Celebrating my Beautiful Friend who is like a brother to me. He is still here and very much Alive fortunately, but why wait for someone's ho'olewa to let them know how much you appreciate them.

I first met John at the University of Hawai'i at Mānoa while we were both attending college there. He was kind, humble, easy going and share my sense of humor.

A fellow kanaka, he had a rough upbringing. He and his family had been homeless at one time and lived in a bus on a vacant lot for quite a long time. He used to go out and sit under the streetlights on the neighborhood sidewalk to do his school homework in high school. One day, he came home and the bus, their home, had been towed away. He lost all of his belongings, clothes, photos, documents and other household possessions, to never be recovered.

He never complained about Life being unfair as long as I have known him. We both bought mountain bikes and would ride them to Diamond Head beach near Doris Duke's Shangri La Estate and Jim Neighbors' home as well.

That was my snorkeling and fishing spot, but most of the time we would just lay on the sand and Sun ourselves. We were exercising and I had been going to the gym and lifting weights. John was very athletic and ran marathons. He was like a gazelle when he ran. I was like hippopotamus.

Once we were both laying on the sand and in the blazing Sun. A bunch of girls walked past us and then we heard them laugh out loud as they ran down the beach. John and I both sat up. I looked at him and he looked at me. I noticed that he was entirely covered in coconut oil or some type of sun tan lotion. I was equally shiny. On our radio, David Bowie was singing "Space Oddity" and we both laughed out loud realizing that the Diamond Head "gay" and "nude" beach wasn't too far around the bend from us. We knew exactly what the girls had been thinking as they came upon us both laying there. That was the last of our Sunning there for awhile.

John loved playing drums and had a nice acoustic set. He didn't have a place to keep his drums other than storage so I let him set up his drums in my dorm room at UH. He would also crash and sleep in the living room there with us. My roommates were pretty good sports about it.

The only time we could really play was during Friday and Saturday nights, and even then, he had practice pads covering his drum skins so they weren't too loud, and our guitar and bass amps were set down low as well.

However, whenever there was a fire drill, mostly on Saturday afternoons, we would make a mad dash to the living room, like Firemen responding to a fire. We had a fire alarm bell right outside our room, so we would crank up the amps and he would remove the drum pads, and we would crank Metallica "Harvester of Sorrow" or "Enter Sandman" or some other crazy song, as loud as we could for about a minute or two. Nobody every complained. Although, one Saturday evening, I was so tired, that I chose to hide in my room closet when the alarm went off. The dorm monitor somehow opened the closet and found me in there. She was so mad. She made me leave right away and wrote me up.

John served in the U.S. Army and then in the Army Reserves. He worked for the Department of Human Services too helping the less fortunate with their benefits where he still is today.

He bought an apartment, rented it out and lived on a boat in the Ala Wai for a decade, paying off his mortgage. He then upgraded and lives in a really nice new condo in Kaka'ako. Not bad for a young Hawaiian who had a hard start in Life, through determination and hardwork.

He kept selling his boat and getting a bigger and more expensive one until he had a pretty large vessel that had room to live comfortably on and also speed out on the ocean. I only went out with him twice on his boat.

The first time, he took me out into the deep sea off of Waikīkī.  It was pretty exciting as we went over the waves and out so far. I was kind of worried I would drown and die somehow, but it was still fun. When we came back in, he asked me to go onto the bow, or front, of his boat and help slow the boat as we came into his slip.

He had be grab a collapsible pole and I quickly extended it and locked it into place, and put it out in front of us as we came into the slip, quite fast. He yelled for me to push it against the dock and help slow the boat. I did. The pole quickly collapsed, one segment at a time, then we hit the dock and I went flying over the bow and crashed into the slip utility box.

People around us were startled and some laughed. I felt like Gilligan and the Skipper. I was so embarrassed. We both got a good laugh out of it however later.

The next time, he asked me to help him get his boat to the Ala Wai Dry-dock which was right around the corner near the Ala Moana Blvd. Bridge. No deep sea boating. So jumping waves. It sounded like a short and simple trip.

Well, we backed the boat up and started heading to the dry dock. It seemed like we were going a little too fast and then we started heading into the dock area and I could see a man there, yelling and waving at us to slow down. John tried to slow down as I went onto the bow of the boat. I made sure the extension pole was locked in place this time so it wouldn't collapse, all the while trying to keep my balance as we approached the dock was too fast for my comfort.

Sure enough, we crashed into the dock, and my pole didn't collapse like last time, but instead, catapulted me over the bow of the boat so I crash landed on the dock again. The man there yelled, "What the hell?!" I felt like Gilligan again. That was my last boat ride with my friend however.

So I found this photograph of when we went to Waipi'o Valley while in college. We found one of the largest coconuts I had ever seen floating right towards us in the ocean. So we made a Tina Turner wig out of it. Luckily, I don't think John has Facebook. Lucky for me. Hopefully he doesn't know about my Blog here either...

Anyway, that's how we roll. Like Tina Turner. Beyond Thunderdome...