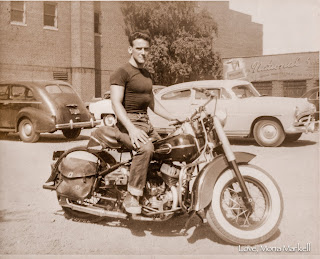 One of my Favorite photographs of my Father, Elliott Raymond Markell. Here he is, on his 1946 Harley Davidson Knucklehead, in July of 1952. He rotated through several Harley Davidson bikes and an Indian Motorcycle too. He was trying to woo my Mother and capture her Heart with his cool James Dean vibe.

In actuality, he was a sensitive and soft man, trying to be cool and rebellious. He wrote Poetry and Love letters to my Mother. And she, to him. I read them today in humble witness to the depth and power of their Love.

He worked parking cars in a big parking lot, and lifted weights during breaks with a barbell set stashed at his work place. He loved driving all the cars to park them. He often made offers to buy cars and would cycle through different cars, often picking my Mother up for dates in a different car every so often.

My father considered himself a "Knucklehead" growing up. He once shared that when he was seven years old, World War II had just broken out and the December 7, 1941 bombing of Pearl Harbor had just occurred.

His family and grandparents were talking about WWI and WWII in the living room of their home in upstate New York.

His uncle, Manley, asked my father, in front of the whole assembled family, who the current President of the United States was now that War had broken out.

My father genuinely answered who he thought. He said, "Abraham Lincoln" and everyone erupted in laughter. My dad ran away so shamed and embarrassed that he didn't know enough, and he hid out for the remainder of the day.

He dropped out of high school too later on. But when he met and fell in Love with my Mother, he wanted to give her a good life. So he went back and finished high school, being the oldest and biggest student in class. He was so embarrassed.

He then graduated with a less than stellar GPA. However, he applied to Rutgers University, and wrote the longest personal statement he could, longer than their recommended word limit. They admitted him, despite his poor grades, because the school was impressed with how hard he tried to fix his life.

He joined the Navy, as a Seamen. When he graduated from Rutgers, he joined the United States Marine Corps and went to Officer Candidate School. He worked his way up to Lt. Colonel, was a Vietnam Veteran, and retired out of Fleet Marine Force Pacific Headquarters at Camp Smith as a leading expert in Wartime Reserves, serving as Wartime Reserve Manager in G-4 Logistics and also serving as Deputy Chief of Staff for Intelligence for the Commanding General. He earned many Letters of Commendation along the way and some Meritorious Service Medals issued by the President of the United States and Secretary of the Navy.

Love can make you change your Life for the Better. Thank you Father. Thank you Mother. Love you Both Immensely. Always and Forever...

I will always seek to Improve my Life, Character and Being, for I so Love You...