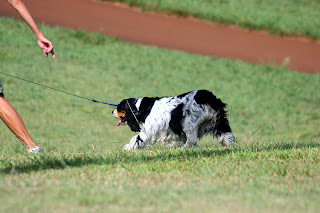 This beautiful dog on Kaua'i reminded me of two English Springer Spaniels we had when I was younger. Two girls. Lehua and Pele. They were awesome. I miss them terribly. We also had several mixed breeds when I was really young. We call the "poidogs" in Hawai'i. And after the spaniels, a big black Doberman which my parents found on the side of the road during a rain storm. Nobody claimed him from the police so we kept him. He was spooky but never ripped my throat out. I miss him too. Baron was his name. Then there was my mother's chihuahua, Ipolani. So beautiful. I miss her too. Now they have three more chihuahuas.
I used to have lots of pets growing up. Aside from freshwater and saltwater fish. I had several turtles and tortoises. Mice. Hooded Rats. A garter snake who bit me. A long nose tree snake who didn't bite me. Anoles. Rabbits. One guinea pig. A horned toad (which is really a lizard), a real Toad. Tadpoles and Pollywogs. Frogs. A Hawaiian blind snake. A baby octopus and lots of moray eels. Crawfish. Polynesian prawns. A cattle egret which I found injured in Kawainui Marsh. Ducks and Chickens. And I may be forgetting some. My sister had four Rottweilers. They were like little hippopotamuses and beat me up real good when we wrestled.
One time when I was small and we were visiting friends in California. I saw a beautiful velvet ant crawling on the ground. I recognized it from my bug book. I grabbed it and carried it home and put it in a Mayonnaise jar. Later, I pulled him out to show my dad. And he stung me with the most painful stung I had every felt up to that point in my life. He fell to the floor and my father stomped on him. Later I read about velvet ants in my book. They aren't ants at all but members of the wasp family. That is the last time I just looked at pictures without reading the full text and description. Served me right.
Elliott and Koa have only had one tadpole which turned into a tiny frog. And they now have a bucket with some goldfish in it on the lanai. That is about it. That is sad. I wish they could have more pets. I think my love of animals growing up taught me invaluable lessons on responsibility, compassion, affection and love. My building doesn't allow for pets. Except for fish. Although sometimes at night, I hear a little dog bark. I suspect he is a stowaway. And I once saw an older woman with cat litter in her bag. And I know another tenant who has a Guinea Pig on their lanai. I guess rules were made to be broken. I guess I will get Koa his pony after all...