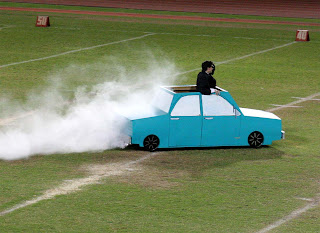 I enjoyed the half-time show at the Battle of the Bands at Kamehameha School last year. Especially the smoking car.
When I was in high school. I worked at McDonald's in Waikiki. I lived in Makakilo which was about twenty five miles away. One night, after closing the store with my co-workers. I headed home in my 1969 VW bug. It was tricked out but had a stock motor. I was blasting home on the H-1 freeway and zoning out from exhaustion with the radio blasting rock music to keep me awake. At some point, I noticed the little red light on my speedometer was glowing. I watched it for awhile wondering what it was. Then I realized it was the temperature warning. I looked in the rearview mirror and all I could see in the dark behind me was plumes and plumes of white smoke blasting out of my engine compartment. Just then, the engine conked out and I coasted to the side of the road.
I got out of the car and I couldn't even open the engine hood in the back because it was so hot. By the time I got the hood opened, the whole engine had melted. The acrid smell of burnt rubber and melted plastic stunk up the air. It was a complete meltdown. My fan belt had broken and I was too tired to notice until it was too late. Air cooled engines need more than blasting air to cool down as I found out.
It was about 1:00 in the morning at that time and the highway was deserted. It was about four miles to the Makakilo off ramp. These were the days before cell phones too. In my McDonald's uniform, which smelled like raw hamburger, I began pushing my car home on the side of the road. Several cars passed. And I kept walking and pushing. Once the car started moving, it was easier to keep it going with momentum.
I didn't get very far when a car pulled over with two men. They had been drinking and were headed home to Wai'anae. They offered to tow me home. I was elated. After they hooked me up, I explained where I lived and off we went. They were all over the road. And so was I tethered behind them trying to steer straight after a swervy car.
We made it to my house after much yelling out the window of where to turn left and where to turn right. I was just happy to be alive after an engine fire and a D.U.I. tow. I eventually had the engine rebuilt but couldn't afford the upgrade from the stock 1600cc engine to the dual weber 2180cc I dreamed about. Or even a 1776cc. I think I ended up with a 1641. That sucked. 41 measly ccs.
I have such fond memories of that bug. I still dream of owning a black chopped-topped 1957 baby window bug with centerline rims with spinners. My Deutschland vehicle. Like a tank in the German Panzer Division. One day. After the Harley of course. And the college tuition for two boys. And the down payment on a bigger house. And the food. And the electricity, maintenance fee, phone bill, cell phone bill, credit card bills, loan payments, mortgage, private school tuition, storage unit fee, auto insurance payment, car registration, gas, clothes, cable television, cable internet, medical bills, dental bills, medical insurance, and all that other stuff. Sheesh. I'll never get that bug.
But maybe. Just maybe. Tonight. When I sleep. I will have the dream bug. And I'll be cruising the roads. Loving every minute. And you will be right there beside me...